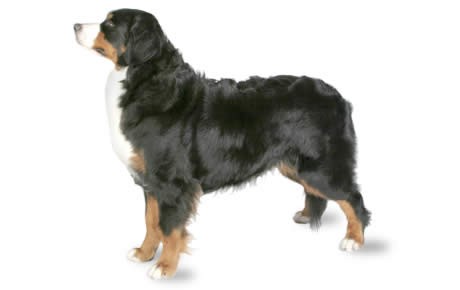 It’s commonly thought that the four Swiss Sennenhund Breeds—the Greater Swiss Mountain Dog and Berner Sennenhund being two of them—developed when the Romans brought their Molosser and Mastiff-type canines as war-companions on their invasion of the Swiss Alps (first century B.C.). These Mastiff’s and Molossers were then bred with Swiss landrace dogs and produced the Swiss Sennenhund Breeds, the ancestors of the Bernese Mountain Dog breed.

It’s highly probable that for years and years the Berner worked hard in the mountains, serving as a utility for farmers. However, in the late 19th century, as the world began to evolve, only a third of the Swiss population worked in any sort of agriculture. Due to the lack of demand, the popularity of their mountain dog began to decrease. In an effort to preserve the lineage of the breed, in 1888, a group was formed called Berna. This group was composed of breeders that produced purebred Swiss mountain dogs.

In the early 20th century, the Swiss Dog Club began orchestrating shows and demonstrating the intelligence, elegance, and athleticism of their purebred mountain dogs. A couple years later, at the international dog show of Bern, there was an entire class for shepherd dogs—which is where the Swiss mountain dogs received their first real exposure to the dog community. In the same year, the SDC first recognized them as Bernese, rather than Berners.

By 1937, a few years short of WWII, the AKC recognized the breed. Since then, the Bernese Mountain Dog breed has solidified its presence in the states.

The Bernese Mountain Dog is the ideal addition to the family—so long as the home is big enough; these are enormous dogs. While they have a very gentle temperament and won’t bother if a child crawls all over them, it’s not due to any lack of alertness or intelligence. Quite the opposite, as this breed is hyper-alert and high functioning. Not just that, but they’re very affectionate, loyal, protective, and family-oriented, which makes them one of the most well-rounded working class dogs in existence.

These are mountain dogs formally bred for work, and while they can have a stubborn and confident personality, they’re rarely too excited or rambunctious. Perhaps—aside from their gorgeous, fluffy coats—that’s what makes them such attractive pets; they’re big, protective, calm, keen like hunting and pack dogs, and yet they didn’t inherit the restless behavior that often comes with working class breeds. In fact, they’re often considered the laziest working dog around.

Of course, as puppies they will be more energetic and require ample exercise to simmer down. But generally speaking, they’re levelheaded, and at times even shy of people and animals that are unfamiliar to them. That’s why early socialization is important for Bernese Mountain Dogs, as they can often develop introverted and apprehensive personality traits if not properly exposed to the world

These are not apartment or condo dogs. No amount of training or exercise can justify bordering up an 80-pound dog in a home without a yard or ample room to move about. A home with a yard is the perfect environment to train a Bernese Mountain Dog, as you can use the outdoors to reward good Bernese Mountain Dog behavior.

Bernese Mountain Dogs are trainable but often slow to the task. They’ll grow into their adult body years before they develop their maturity, which can be frustrating for the owners. While they’re intelligent enough to pick up what you’re putting down—and certainly docile—their lethargic approach reeks of disinterest. However, these dogs are eager-to-please, meaning they respond best to gentle training and positive reinforcement.

As far as a role model, they’ll naturally seek out a leader being that they’re a working dog, and that’s where the owner needs to assert himself; not with a dominant hand, but a patient one. Puppy classes, leash training, and early socialization are a must for this breed. Without the proper exposure and obedience training, you run the risk of an adult with a very shy and nervous temperament, one that acts like a bull in a china shop within the home.

More often than not, your Bernese Mountain Dog is going to be a couch potato and energetic only when motivated—but sometimes, if they’re restless, they’ll tear up the home. This isn’t normal, but it’s important to rally your dog to exercise every day so to avoid that possibility.

The topic of exercise is an interesting one with Bernese Mountain Dogs. One would think, taking into consideration their working class ancestry, that they’d need a robust amount of activity. But due to their heavy bone structure and proneness to joint problems, the breed tends to experience short bursts of energy, and long surges of laziness. Point being: not in the puppy years, but over time you’ll have to motivate your Bernese Mountain Dog into shape.

Generally, they require around 30 minutes of high-intensity exercise per day in addition to a couple brisk walks or time spent in the yard. Double that requirement, motivate your dog, and you’ll mitigate the possibility of any health problem related to obesity or heart failure. This should be a necessary step of their training process as these dogs are prone to experience health problems.

Popularity of the Bernese Mountain Dog

The Bernese Mountain Dog ranks 27th on the AKC’s most popular list of 155 registered dog breeds. Their affectionate demeanors, gorgeous coats, and levelheaded-nature make them a perfect companion for the family. Ever since they came to the US in the 20th century, they’ve only increased in popularity, especially now that they’re more pet-like than work-oriented.

The rule of thumb for feeding a Bernese Mountain Dog is to administer 3-5 cups of high-quality, dry food per day, divided into two equal meals. Puppies will have a tendency to be glutinous about their intake, that’s why it’s important to balance out their meals and ensure a steady growth.

These dogs—due to their size—will want to eat a lot. Thing is, they want the food but don’t want to put in the work to balance it. Meaning it’s a possibility that if your Bernese Mountain Dog isn’t active enough, and yet you’re feeding them the standard amount, weight gain can occur.

Age, metabolism, weight, and activity level are all integral Bernese Mountain Dog characteristics to be considered when deciding how much to feed your dog. They must be taken into consideration, and high-quality food needs to be the norm; Bernese Mountain Dogs aren’t the healthiest breed and tend to have shorter life expectancies, thus the owner should do everything in their power to ensure longevity. This too means balancing food portions versus daily exercise.

One of the most prominent characteristics of a Bernese Mountain Dog is their coats; they’re simply breathtaking. They sport a double-coat base with a long exterior and wooly interior. Normally colored shadow black with sprinkles of luscious rust and snow white, they can also be white-dominant, although that’s unusual. But as you know, beauty begets work. With such luscious, fluffy coats, these dogs shed endlessly.

You’ll need to brush your Bernese Mountain Dog vigorously. Multiple times a week should be routine, with a daily brushing come spring and summer (hotter climates mean double the shedding). Use a bristle brush for their coats, and make sure to bathe them bi-monthly with the proper shampoos; they need the nutrients to maintain the oils and cleanliness of their fur.

Brush their teeth 2-3 times per week to avoid tartar and bacteria buildups. Trim their nails as needed, and don’t expect their activity-level to be the force in wearing them down. Begin routine checkups of the eyes, nose, ears, paws, and coat in the puppy ages, and incorporate the sessions into obedience training.

Bernese Mountain Dogs are often purchased due to their affable, child-loving nature. Patient, calm, and protective, they’re the perfect older sibling that’ll not only be their companion but also their support system. They’re not overly enthusiastic or rambunctious so they won’t bombard the kids, or—generally—lack spatial awareness and play too hard. They’re a perfect addition to the household, and kids tend to love fluffier dogs, making them a quick favorite.

Bernese Mountain Dog life expectancy is shorter than it is for most other breeds. This is due in part because they were once a working dog that spent their days exercising, and worked their bodies to their full potential. Now, they’ve lost some of their workaholic and athletic traits, yet they kept the similar bone structure. That means they’re prone to joint problems, obesity, and other health problems. While it’s probable that your Bernese Mountain Dog health will be good throughout its years, the conditions that can afflict them are as follows:

Hip Dysplasia: this is a big one, being that the build of a Bernese Mountain Dog often causes this condition. It occurs when there’s displacement between the thigh bone and the hip joint. It can cause difficulty in walking, lameness in the leg(s), and extreme pain. Screenings can be done to diagnose hip dysplasia in canines. That means—before purchasing a puppy—be sure the breeder can provide clearances for the parents. There are treatments available.

Cancer: there’s an array of different cancers that can affect the large Bernese Mountain Dog. It’s a condition they’re a bit more prone to than most dog breeds. Symptoms include abnormal bloating, bleeding from extremities, abnormal swelling or sores that don’t heal, and more. Treatments include medication, chemotherapy, and surgery. Be sure to take your Bernese Mountain Dog to routine veterinarian checkups to ensure any condition—if present—is caught early. Especially cancer.

Elbow Dysplasia: identical to hip dysplasia, this displacement simply occurs in the elbow. It can cause lameness in the leg(s), difficulty walking or straightening the arm, and immense pain. It usually results from an abnormal or underdeveloped elbow, and the severity of the condition ranges from completely manageable, to needing surgery.

Progressive Retinal Atrophy (PRA): this genetic eye disease causes the deterioration of the retina. Once the photoreceptors in the back of the eye begin to fail, the condition causes impaired eyesight, and in the worst case scenario leads to complete blindness. The first symptoms are night-blindness, which then progresses to difficulty seeing during day time. Despite the limited treatment, dogs will adjust to their blindness by using their other senses for navigation. It’s certainly not a coveted illness, but it’s not an end-all one either. We began giving Sherman Canna-Pet drops 3x day before he started chemo. His limp subsided within days of using the oil and he’s as active as a 9 year old Berner is – he does enjoy his sleep! All I can say is I believe in Canna Pet and thanks to my friend Jenn with all my heart for letting us know about such a good product. Liza enjoyed another 6 months with the family thanks to Canna-pet and her thumper kept that beat until the very end thanks to your wonderful product.