According to the Smithsonian, humans have had domesticated pet cats for over 12,000 years. In that time, humans and cats have developed a strong relationship. They continue to quell anxieties, provide comfort, and catch pests, and we care for them, show them love, and make sure that they live healthy lives.

A cat will, on average, live for about 15 years, but even cats can succumb to diseases, including various forms of cancer. While cancer is more common in dogs, it can still be a prevalent disease in your favorite feline friends.

Cancer affects an estimated 6 million cats each year, and it is the leading cause of deaths in about 32 percent of cats. Let’s take a closer look at cat cancer in its different forms, its symptoms, and what you can do to treat or prevent cancer in your cats. Much like cancer in humans, feline cancer is hard to pin down. There isn’t any single known reason for a cat developing cancer. Many are caused by a mix of genetics and environmental factors that took effect years before the cat’s actual diagnosis.

Genetic mutations can be passed down, increasing a cat’s predisposition to growing certain tumors, but most mutations happen during a cat’s lifetime. Internal factors causing these mutations include exposure to certain hormones, while external factors include everything from tobacco smoke to sunlight.

However, there are some known factors that may contribute to an increased risk of cancer in cats. For example, cats that have been spayed after the age of six months are about seven times more likely to develop mammary tumors (which can point to mammary gland cancer) than cats spayed before six months. Studies also suggest an association between feline immunodeficiency virus and feline leukemia and lymphoma. 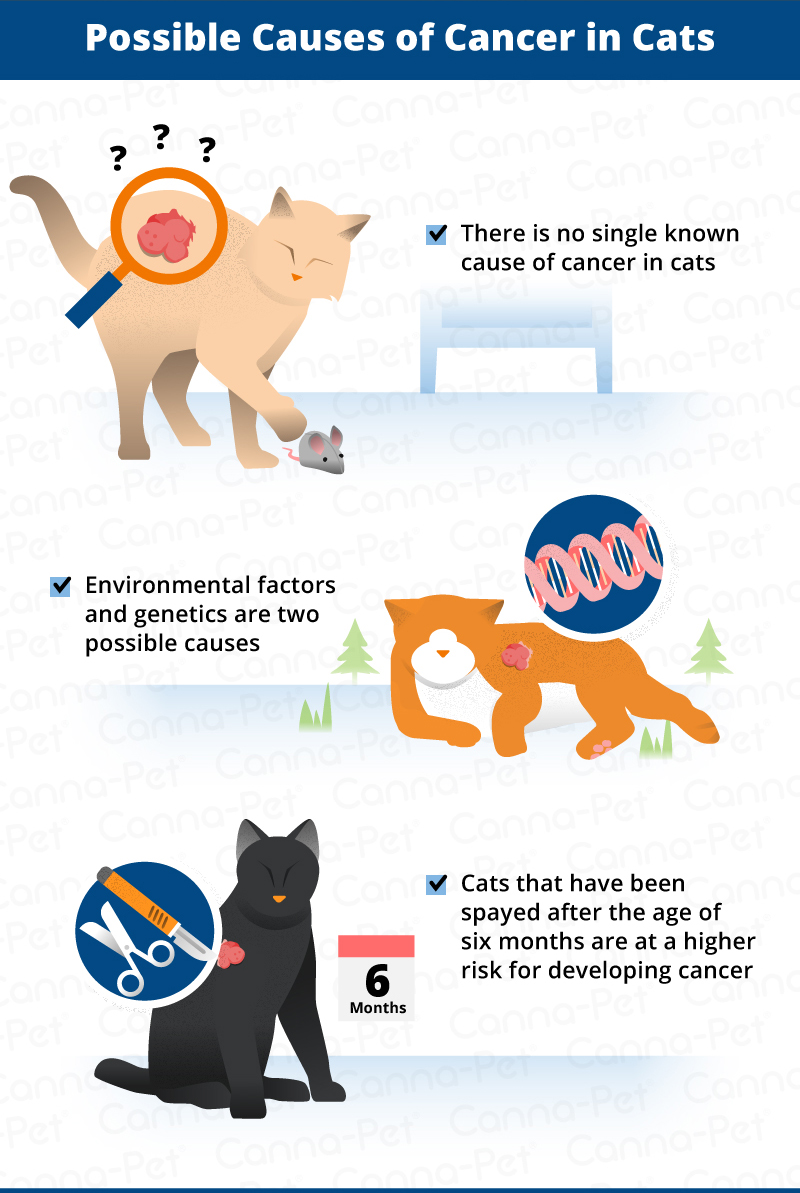 Cats who may have cancer can exhibit a wide range of signs and symptoms, both physical and behavioral. Some common signs of cat cancer you should keep an eye out for include:

While tumors are commonly associated with cancer, they could very well be benign. There’s no way to know without a professional test and diagnosis. The Most Common Types of Feline Cancer

Much like human cancer, feline cancer comes in various forms affecting different organs and organ systems. Some may be more aggressive than others. Some of the most common types of feline cancer include: A Look at Feline Leukemia Virus

When humans hear leukemia, they assume it’s much like the human equivalent of cancer of the blood cells. In reality, feline leukemia virus (FeLV) is not cancer but a viral disease more comparable to human HIV. While related, FeLV is not the same as feline immunodeficiency virus.

Feline leukemia suppresses a cat’s immune system, making it more susceptible to infections and illnesses. When left unchecked, FeLV can lead to blood disorders and cancer. Signs of FeLV include:

FeLV is most often spread by cats who are already infected with the disease. The virus has a high concentration in saliva, urine, feces, and milk of infected cats. The disease can be spread via bite wounds, mutual grooming, and sharing feeding dishes and litter boxes.

Thankfully, FeLV can be managed. Only about 30 to 35 percent of those infected with FeLV will continue to carry the virus, but anti-virals, immunity builders, and nutritional supplements can help your cat live a long, relatively undisturbed life.

Depending on the type of cancer your cat is diagnosed with and the site of the tumor, you have a variety of treatments available to you. Surgery to remove the tumor and cancerous tissue is the most common treatment. This may comprise partial removal to improve the quality of life. It’s common to also remove surrounding tissue that appears healthy as it may contain abnormal cells.

With proper calculations of frequency and dosage, radiotherapy can effectively kill cancer cells without causing damage to surrounding tissue. For more localized treatment, like treating squamous cell carcinomas, specialists may use brachytherapy wherein radiation sources are placed inside or on the surface of the tumor. Radiation therapy, on the whole, exhibits very few side effects.

Chemotherapy is an option for cats with lymphoma cancer. Lymphoma is the most treatable cancer and most responsive to chemotherapy. Chemotherapy can be an aggressive cancer treatment plan, as well as expensive. It’s important to consider all factors like quality of life of your feline when making decisions about treatment options. Palliative Care and Living with Cancer in Cats

The best thing you can do for a cat with cancer is to provide a healthy, balanced diet filled with necessary nutrients. To maintain a healthy appetite, provide your feline friend with a variety of foods. You may also consider nutritional supplements, like those provided by Canna-Pet such as CBD for cats. It’s also a good idea to keep a diary recording your cat’s diet, appetite, behavior, and abnormalities.

If your cat is experiencing pain from cancer or from treatments, your doctor may prescribe analgesic painkillers or anti-inflammatory drugs. If your cat exhibits a low white blood cell count or develops an infection, consult your doctor for the use of antibiotics. 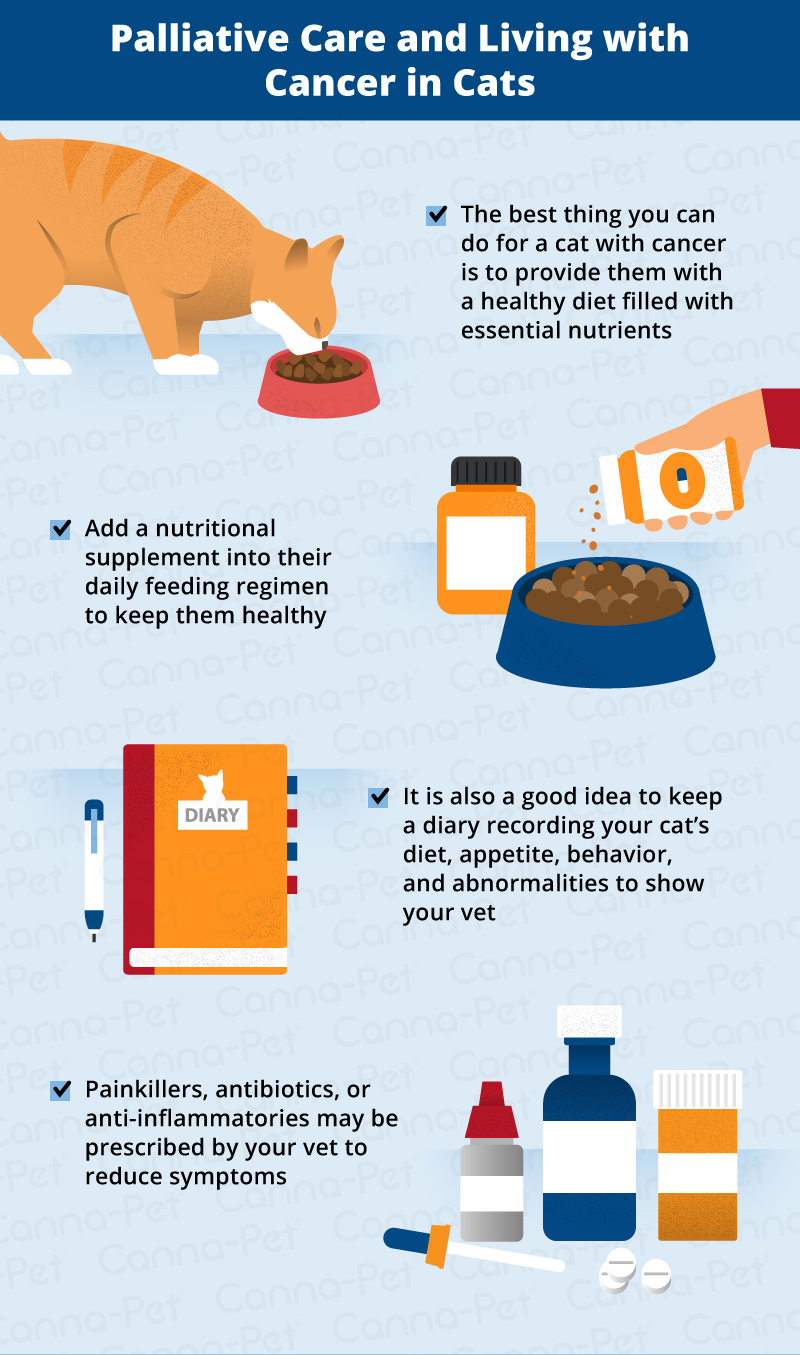 The genetic component of cancer makes it difficult to completely prevent any form of cancer in cats, but certain steps can reduce your cat’s risk of cancer.

Whether or not your cat has cancer, never be afraid to consult your veterinarian if you have questions or need advice. Remember to always provide your cat with plenty of love and care.