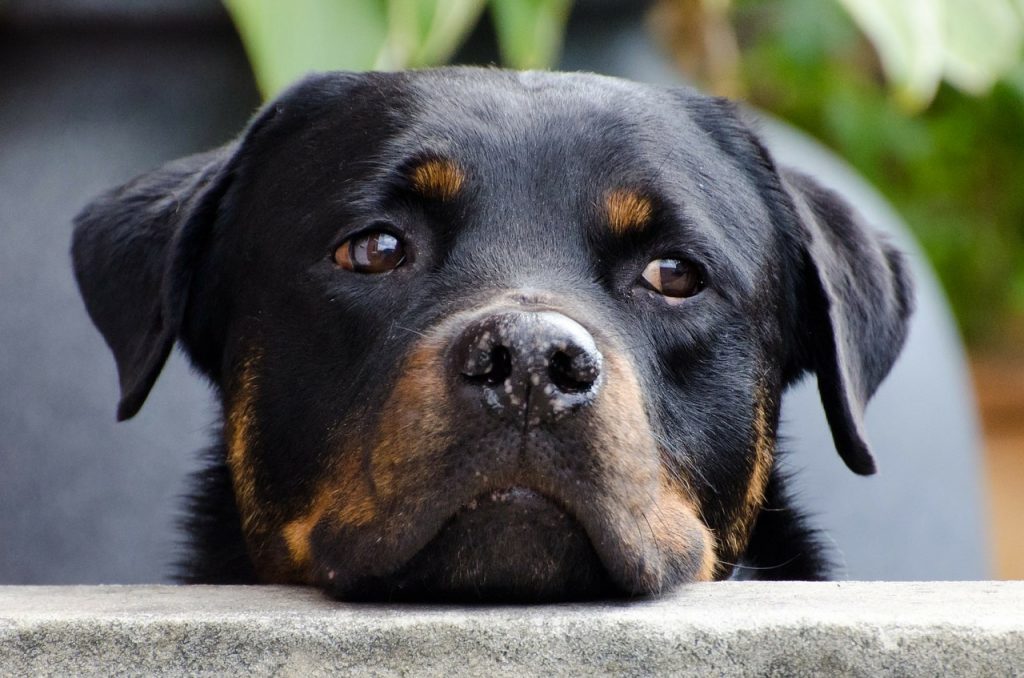 Rottweilers rank 8th  on the AKC’s most popular list of 155 dog breeds. These incredible companions are about as loyal as can be, come from a long lineage of working-class canines, and are huge lovers of the family. They’re a dignified dog that serve as a fantastic protector of the household and often love to create a home on the living room couch.

Across the board, these dogs rank well in every facet on the dog spectrum. They’re naturally docile and calm, meaning they’re easy to train and housebreak, and—despite their size—they don’t require massive amounts of exercise. However, that very convenience can also become detrimental to their health. These are big-boned, large dogs that adore becoming the household companion, and are often only affectionate with those closest to them.

Rottweilers, like any dog breed, can be prone to canine health problems. While most live healthy lives, with their life expectancy somewhere between 8-11 years, it’s important to know the full range of Rottweiler health issues and the steps required to mitigate those risks.

Despite their vulnerable eyesight (which is often hereditary), these are heavy-set dogs that are sometimes lazy. They often prefer to be a couch potato and lounge around rather than partake in rigorous exercise. Unfortunately, while Rottweilers need exercise to prevent obesity, too much of it puts stress on their already weak joints. Possibly passed on from generation to generation, PRA is one of the most common conditions that can affect Rotties. In fact, their eyes are one of the most vulnerable parts of their genetics. This can be anything from gradual vision impairment and cataracts, but PRA affects them the most.

PRA occurs when the photoreceptors in the back of the eye begin to fail. What first ensues is night blindness, which means the Rottweiler has an incredibly difficult time seeing in the night. This then progresses over time and begins to affect daylight vision as well, and unfortunately evolves into complete blindness in dogs. While there’s no cure for PRA, the one silver lining is that it can be diagnosed early in a dog’s puppy years, meaning the owner and canine have time to prepare for blindness.

Another eye-related condition, this occurs when there’s an opacity within the lens of the eye. Eyes (in most animals) are similar to cameras, and require a lens to shift in and out of focus. The severity of cataracts in dogs ranges from incipient, immature, and hyper mature grades.

An incipient cataract is usually benign, and while it is an opacity, it doesn’t actually interfere with vision. An immature cataract is one of the most common types found in dogs, and not only is it visible on the outside, but it also clouds their vision. A hyper mature cataract is one that completely clouds the eye and causes the lens to shrivel, which leads to a complete impairment of eyesight. These are the most severe, and often can only be corrected by surgery.

While there is an array of different methods for treating cataracts in dogs (or at least reducing their growth rate), usually they require surgery. Unfortunately, these surgeries can be quite expensive as they require specific tools and a niche skillset. However, unlike PRA, cataracts are not an end-all canine eye disorder, and oftentimes, one of the most rewarding procedures for veterinarians is removing the opacity and gifting the canine with eyesight again.

This condition affects the cardiovascular system and occurs when there is a partial obstruction in the flow of blood to the heart (specifically the left side). The left ventricle has a difficult time passing blood through the aorta, which is what pumps blood throughout the rest of the dog’s body.

Because of this difficulty, the Rottweiler’s heart has to work double-time to keep healthy and constant blood flow, which eventually exhausts the organ. This can then lead to a heart attack, which usually takes the owner by surprise as they were unaware a condition was ever present in the first place.

Thankfully, there are tests that can be conducted to determine whether or not the Rottweiler’s heart has an abnormal rhythm. Everything from an EKG, chest X-rays, and Doppler echocardiography can be executed in their puppy years to ensure there’s no heart murmur. There are breeders now testing their dogs by qualified cardiologists, to ensure that they’re not breeding puppies at risk of heart disease. This is an important health issue to be aware of, as it often affects heavier set, lethargic canines (exactly what a Rottweiler is known to be). It occurs when there’s a displacement between the hip joint and the thighbone. When the two do not sit flush, the strength and mobility of the hips wane, which eventually causes an assortment of symptoms.

These symptoms include pain when walking, an abnormal gait, extreme tenderness and fragility, lameness in the leg(s), and at its worst, immobility.

Similar to some of the aforementioned conditions, canine hip dysplasia can be screened for early in a dog’s life, and planned for accordingly. Breeders are aware of this problem and the responsible ones try to ensure they’re not breeding canines prone to this condition.

There’s an assortment of different treatments readily available for hip dysplasia, and they range everywhere from light medications to open surgery (depending on the severity of the disorder). However, it’s important to note that a Rottweiler with hip dysplasia will often develop a gait that supports their weak hip, and live a perfectly healthy life ongoing.

Quite similar to hip dysplasia, elbow dysplasia in dogs occurs in the elbow joint when there’s a displacement between the joint and the bone. It doesn’t cause complete dislocation like patellar luxation, but it can be quite painful and complicated if severe enough. Symptoms are the same as those of hip dysplasia, as it can cause lameness in the leg(s), extreme pain, an abnormal gait, difficulty straightening the arm, and immobility.

Depending on the severity of the condition, there is a wide array of different treatments available, and surgery is offered if the elbow dysplasia is preventing mobility or causing extreme pain in dogs. These surgeries are usually successful, and the Rottweiler goes on to live a perfectly healthy life. Osteochondritis Dessicans in dogs occurs throughout all the joint areas of the canine, and most commonly affects bigger boned dogs. It takes place usually at 4-6 months when their bones are stretching out and the cartilage is turning into a joint. Sometimes the bones simply grow too fast, or shape without the proper alignment, which can cause bones to break, press against each other, and joints to form abnormally.

The symptoms are similar to that of elbow and hip dysplasia, but can actually be more painful if there’s dislodging or breaks, in which pieces of the bone can sit in sockets or open spaces. These breaks or misalignments can be detected via X-ray and often corrected by surgery, although some dogs are affected by OCD to the point that surgery is not an option, and they must live with their poorly developed frames.

A study conducted recently showed that one of the most common causes of death for a Rottweiler is cancer, most commonly lymphoma (however, bone, liver, and spleen cancer are quite prevalent as well). Unfortunately, the exact causes of cancer in dogs of all breeds is not known.

But similar to human anatomy, cancer can be cured, as the tumor can be removed or destroyed via radiation therapy or chemo. While this horrible disease isn’t something you ever want your canine to go through, it’s not an end-all disorder in this day and age, and can often be treated.

The symptoms of cancer in dogs are vast and different, but the trick is to constantly examine your dog and take him for routine checkups to ensure there are no tumors forming. Nowadays, there are even vaccines given to certain canines that can prevent cancer from forming down the road.

While Rottweilers aren’t necessarily prone to being allergic to many things, their coats can be particularly sensitive to certain shampoos and external factors (pollen, dust, etc.) If you notice that your Rottie is constantly itching his skin, or if there are rashes (often small red bumps developing in the undercoat), he may be suffering from canine allergies or eczema.

Rottweilers have a thick, dense undercoat that can often accumulate bacteria and fleas, but the rashes can also be a reaction to something in their immediate environments. First off, it’s important to note that the Rottweiler is in the top ten most popular dogs in America, meaning there are a slew of puppy mills out there trying to produce as many of them as possible. A poorly bred dog is going to be at risk of a variety of health problems.

It’s important (if you’re not rescuing and looking for a purebred) to know exactly how reputable your breeder is, and to check on the conditions of your dog’s parents before choosing your puppy. This means that your breeder should be able to provide the full list of health clearances.

Secondly, knowing exactly what your Rottweiler is prone to developing is important. Exercise and high-quality food is important, as there’s a difficult balance to find with this breed. Because of their big bones (which have a propensity to grow too quickly), you need to be sure that your Rottweiler doesn’t exercise too vigorously, or play too roughly as a pup, as this can only increase the risk that he will develop joint-related problems.

But this is a double-edged sword, as this breed can often be glutinous about their food and quite under-motivated to exercise, in which obesity can ensue. With an already fragile cardiovascular system, obesity further exposes them to the risk of heart disease. The point here being: you need to be sure that your dog receives the utmost quality food, monitor his diet, and ensure he gets just enough exercise to mitigate weight gain and yet not enough to put strain on his body.

In terms of canine cancer, there are assortments of different vaccines on the market that mitigate risk for certain types to develop. Just as well, spaying your puppy vastly reduces the risk of him developing certain types of cancer. Statistics prove Rottweilers that have not been spayed are twice as likely to develop some forms of cancer during their lifetime.

Another way to keep your Rottweiler healthy is to closely monitor your pup. Although this is a strong, intelligent, and healthy breed, it is important to be aware of the problems Rottweilers face. With this awareness, be sure to invest the proper time in assuring that your dog is examined and properly groomed. Nearly all of these conditions that have been mentioned above can be screened for, so don’t hesitate to take your pup for an annual checkup to ensure he is healthy.

Lastly, know that the chances of your Rottweiler growing to become a healthy adult is much more likely than him having health issues. Resilience is in his blood. Being aware of the problems that can afflict your pup and the steps you can take in preventing those risks is important for keeping your Rottweiler healthy.