Witnessing your dog have a seizure is one of the scariest things that can happen to a pet owner. Although seizures are not painful, they look frightening and can cause you and your dog to panic. And your dog having a seizure is only made more frustrating if you don’t know why they are happening. This post will discuss the many different potential causes of seizures in dogs as well as some treatment strategies. What is a seizure?

A seizure is a temporary, involuntary disturbance of normal brain function that is usually accompanied by uncontrollable muscle activity. Seizures, sometimes referred to as convulsions or fits, are actually one of the most frequently reported neurological conditions in dogs.

Canine epilepsy is a condition that refers to repeated episodes of seizures. Seizures can occur once or occur in clusters, and can be infrequent and unpredictable or occur at regular intervals. What Causes Dogs to Have Seizures?

There are many potential causes of seizures in dogs. These include:

A condition that is characterized by seizures, epilepsy is the most common cause of seizures in dogs under the age of five. Epilepsy is a disorder of the brain that can cause dogs to have sudden and uncontrollable physical attacks, or seizures. Sometimes, the dog will lose consciousness, while other times, the dog will be awake the entire time.

The term “epilepsy” is itself becoming rapidly outdated because it implies that it is a single condition, however epilepsy most likely involves several conditions that cause the seizures. And just because a dog has a seizure does not mean it has epilepsy. Epilepsy can be idiopathic or the result of genetic abnormalities. If untreated, a dog’s seizures could become more frequent and severe. Younger dogs also tend to have more violent seizures.

Epileptic seizures come in two forms: primary and secondary. Primary, or idiopathic seizures have no known source, although genetic factors may be suspected. An external influence causes secondary seizures and the source is known. Epileptic seizures can cause the dog to fall on its side, become stiff, salivate, urinate, defecate, chomp its jaw or paddle with all four limbs. They generally last anywhere from 30 to 90 seconds. 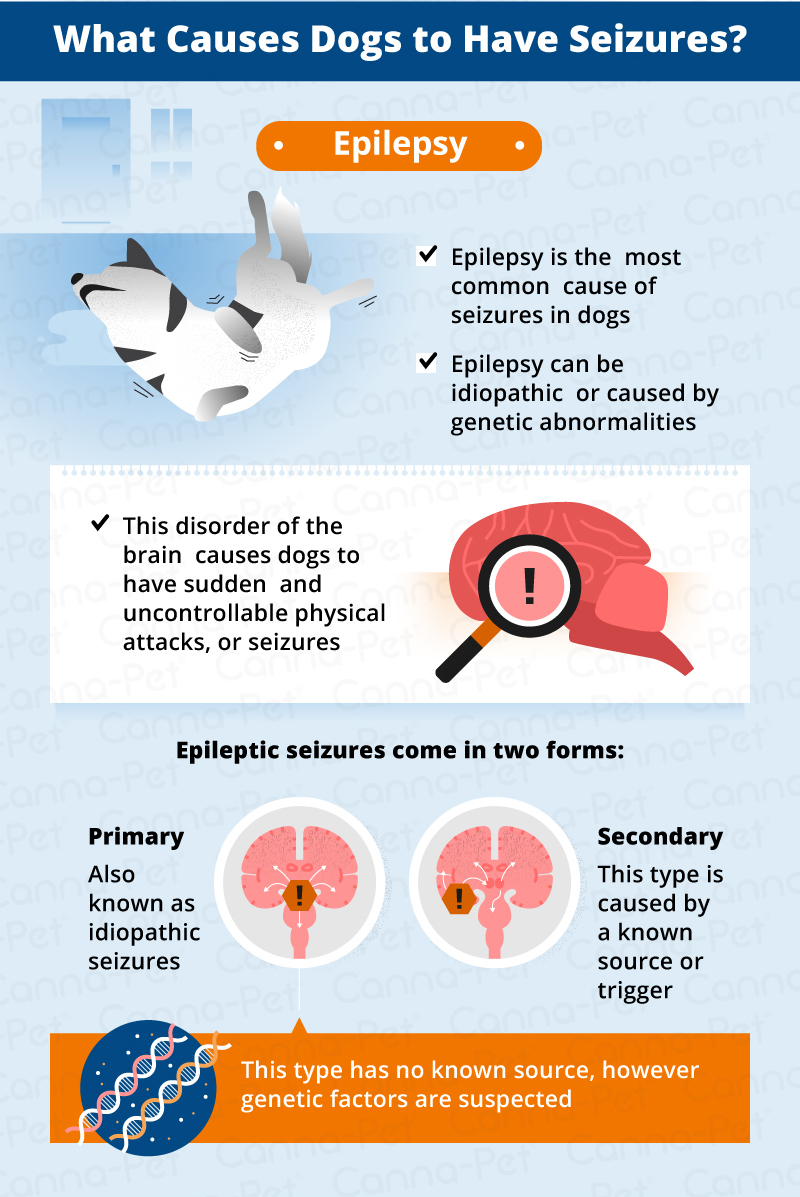 There are two main types of brain tumors, or abnormal growths in the brain: primary and metastases. Primary tumors grow from tissues in the brain while metastases are spread through the bloodstream from tumors found elsewhere in the body. Tumors can be malignant and may also put pressure on the brain as it grows, causing loss of vision, motor coordination and sometimes, seizures.

Cancer growths in dogs can form on the brain or the pituitary gland, and can affect how your dog behaves and functions. Seizures can often accompany this abnormal behavior. An altered mental state, oversensitivity to pain and problems with vision are all signs of the presence of a brain tumor. Tumors are thought of as “intracranial” causes of seizures, and more commonly seen in older dogs (over five years). A brain tumor only accounts for three percent of all seizures in dogs.

A significant injury to the skull could cause dog seizures as well. The injury would probably have cracked the skull, and your dog would not have the seizures right away. They might not be seen until weeks or even months after the initial injury.

Anticonvulsant drugs will not be effective against seizures caused by injury. The drugs are designed to stabilize the neurons within brain cells, but in the case of an injury, the neurons are already stable. The injury itself is causing the seizures because of a “cerebral scar” that shows up on an MRI as an “abrasion” on the skull. This scar or abrasion is an area that forms where the brain tissue has died and puts pressure on the brain, which causes the seizures.

Seizures as the result of injury can have severe detrimental effects to your dog’s health. They can increase the pressure within the brain and constrict blood flow, making the initial injury worse. These two diseases are caused by ticks. The tick bite causes Lyme Disease or Rocky Mountain Spotted Fever by transferring bacteria into the dog. If the tick is found within 24 hours after attaching to your dog, the chance of infection is very small. However, if your dog does get infected with Lyme Disease, it could develop seizures as a symptom.

Another one of the many canine viral diseases, canine distemper virus (CDV) can also cause seizures. Puppies most often develop CDV when they are between three and eight months old, because that is the time when they lose their maternal antibodies.

Puppies that have not been vaccinated or live in a kennel or shelter are most at risk for developing CDV. There is no cure for canine distemper, but vaccinations can prevent a dog from developing the disease. The death rate can reach as high as 80 percent, according to the American Veterinary Medical Association. Despite your best efforts to dog-proof your home, your dog can get into things that are toxic and can lead to seizures. There are also certain plants and things outside that will also be toxic to your dog. It’s best to carefully remove these items or keep them where your dog can’t get to them, but still, it happens.

Ingesting harmful chemicals or plants can lead to the onset of seizures. Some substances that are toxic to your dog and can induce seizures include antidepressants, tobacco, aspirin, alcohol, marijuana, drain cleaners, gasoline, insecticides, and furniture polish.

Natural substances found outside include horse chestnuts, venomous snakes, the brown recluse spider, the Colorado River toad, the Florida marine toad, Russian Olive trees, Codeless, pine trees, spreading junipers, apple trees and apples in the fall, plenty of grass, mushrooms when it is damp, many birds, garter snakes, and more. When you take your dog outdoors, make sure to keep an eye on them.

It is important to keep an eye on your dog when outdoors, and to keep medications and certain substances out of his reach. Seizures due to low blood sugar most often affects puppies because their livers cannot store glycogen for the body to use. Low blood sugar is easy to treat, depending on the severity. Seizures can be caused by your dog not eating enough protein, Addison’s Disease, in which your dog’s body does not properly produce or store glucose, too much exercise, pancreatic tumors, and abnormal function of the dog’s hormones. Another cause of seizures, an endocrine disorder is characterized by low levels of calcium. A dog’s loss of appetite can cause calcium levels to drop, which could in turn cause seizures. Other dogs may develop muscle weakness as well as cataracts. The general acceptable range of calcium levels from the blood serum chemistry is 8.5 to 11.0 (mg/dl). Hypoxia or Hypoxemia is a condition in which low blood oxygen levels result in the reduced capability of red blood cells to carry oxygen. The inadequate supply of oxygen getting to the brain can cause seizures to occur. This may be the result of an underlying lung condition. The liver serves a dog’s body by removing waste from the blood and filtering it back to the rest of the body. When it malfunctions, these toxins can spread to other organs, including the brain. When this occurs, it can lead to what is called hepatic encephalopathy, a result of having too much ammonia in the body.

In hepatic encephalopathy, communication between the portal vein (coming from the gastrointestinal tract) and the vein which carries blood back to the heart (known as the posterior vena cava), becomes abnormal. This communication is normally functional during fetal life but may close off after birth.

When the communication is lost, the blood flow does not pass through the liver for processing or detoxification before being delivered to the rest of the body. This process of communication disruption and toxins in the blood can cause a dog to have a seizure.

This commonly affects small breeds like Yorkshire Terriers, Maltese, and Miniature Schnauzers and signs will generally appear before the dog turns one. Kidney disease can cause high levels of nitrogen in the blood. When there is a high acidic level in the body (known as acidosis), it can cause a dog to have a seizure. This may also cause the body temperature to decrease and the respiratory rate to increase.

Senior dogs are most likely to develop kidney problems. Kidney failure can cause a large number of symptoms to occur in addition to seizures, depending on the original source of the condition. These include weight loss, depression, diarrhea and vomiting, acute blindness, blood in the urine, and increased thirst, just to name a few. Other disease, urinary blockage, diabetes, lymphoma, genetics, and medications can cause kidney disease or failure. 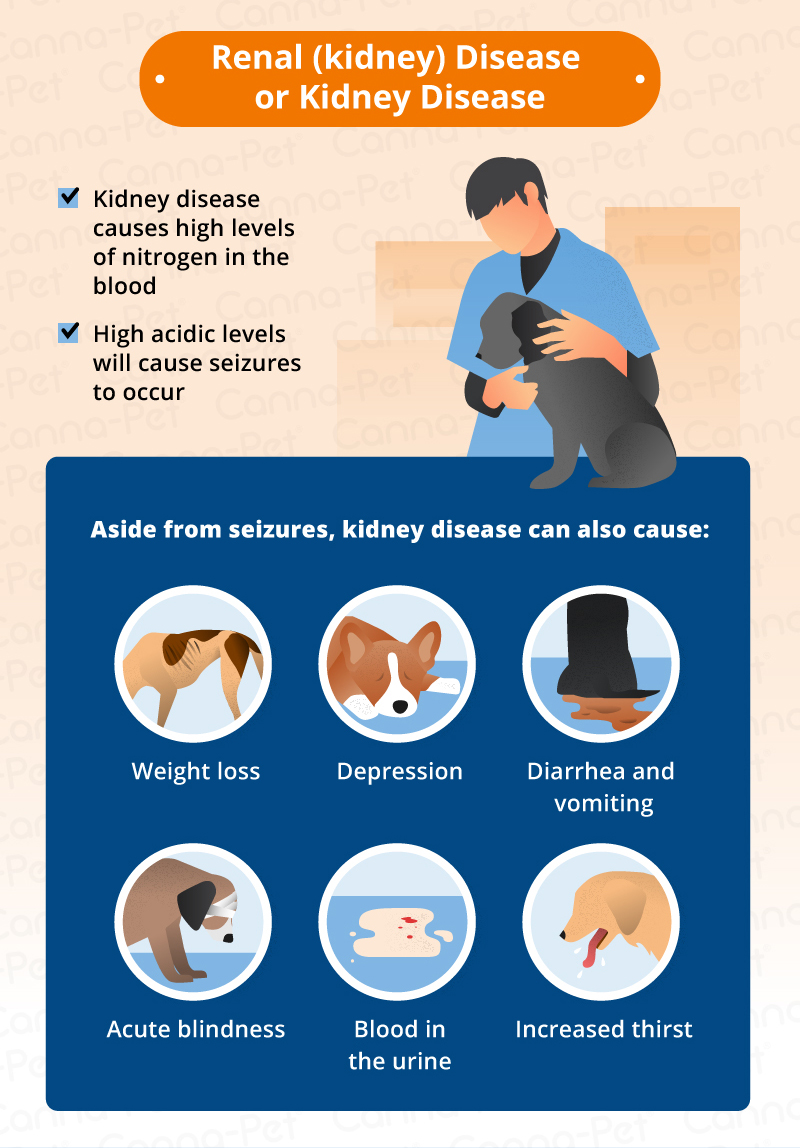 Hyperkalemia, or Addison’s disease, is a condition that occurs when a dog has a high concentration of potassium in the blood. This condition may cause a dog’s heart rate to slow, making it weak. The condition can be exacerbated by exercise and cause seizures.

This disorder is caused by a defective lipid metabolism. This condition occurs when your dog’s body does not properly break down fatty acids in its blood, which may cause seizures. Miniature Schnauzers are most commonly affected by this condition.

Toxo is a disease caused by a germ called protozan parasite or Toxoplasma gondii, that is found in cat feces, raw meat, and uncooked vegetables. Approximately half of people in the U.S. have the Toxo parasite, but the disease is dormant. Similar to giardia in dogs, this parasite is mostly dormant but may flare up at any time, sometimes in the form of muscle spasms or a seizure.

This is a rare disease that exists at birth, which can cause a dog to have a smooth cerebral cortex. Symptoms that arise from this condition, including seizures, will usually be present within the first year of a dog’s life.

Seizures are common in dogs with extreme anemia. Other signs to look for include weakness, pale gums, blood in the urine or feces, vomiting, weight loss, distension of the abdomen, or increased respiratory rate, but some dogs may show no signs at all, because they adapt to the conditions over time. Encephalitis and Meningitis are conditions that affect the brain and can cause seizures. Encephalitis is a brain disease that causes inflammation of the membranes. This is commonly caused by canine distemper (listed above) and can lead to fever, depression, sudden aggression, seizures, and coma.

Meningitis is an infection of the surface of the brain and the spinal canal, affecting the surrounding meninges of the brain and not the brain itself. Although its symptoms may seem similar to encephalitis, they are two different diseases. A stroke and a seizure have the same basic visible characteristics, but they are actually separate incidents. Seizures are electrical malfunctions in the brain, while strokes are the result of a physical problem like a blocked artery or bleeding in the brain. And strokes can actually cause seizures. Immediate medical assistance is recommended if your dog has a seizure after a stroke to improve its recovery chances and reduce the likelihood of another seizure.

What actually triggers a seizure is unknown, but it appears many dogs have seizures during periods of excitability. Dogs will often have seizures when playing fetch or when children return home from school. But some dogs can even seizures while sleeping.

It is thought that seizures can be triggered by anxiety, environmental factors, medications and even certain foods and spices.