Suspecting that your dog has ingested something poisonous is a scary time for a pet owner, but if you think your dog may have gotten into some antifreeze, it can be especially frightening.

Antifreeze is extremely harmful to dogs and can cause some very serious health issues if you aren’t able to act fast. That’s why knowing the signs and symptoms of poisoning in dogs can be such a big help in keeping your dog out of a life-threatening situation. Dogs will get into things — it’s just in their curious nature to investigate — but being able to react fast can be the difference between life and death.

To help you be prepared, we’re going to dive into the signs and symptoms of antifreeze poisoning in dogs.

Why is Antifreeze Harmful to Dogs?

Antifreeze as a blanket term is not really the best description for what makes a dog sick. What poisons the dog is actually a substance called ethylene glycol which is a common ingredient in antifreeze because it lowers the freezing point of water. However, that clearly isn’t as easy to remember as saying “antifreeze is bad” or “poisonous to dogs.”

The initially-sweet taste is what attracts dogs to antifreeze and they are often able to find it rather easily. Antifreeze will frequently leak from a car’s engine onto the ground in your garage or driveway where the dog can lap it up. It may also be spilled when you add it to the car’s engine or if the container is uncapped and knocked over.

Any container or tray that was used to drain the radiator may also contain amounts of antifreeze. You need to make sure you keep a clean area any time you work on your car, especially if you have a dog. If you notice a small antifreeze leak, make sure you clean it up quickly.

Ethylene glycol is used in more than just your car’s engine— antifreeze is also used in hydraulic brake fluids, windshield de-icers, radiator fluid, motor oil, and more liquids used in car maintenance, while it may also be found in other household products, such as paint, solvents, ink, home solar units, and wood stains. This means it is likely that the substance is somewhere in your home whether you realize it or not.

The main issue with antifreeze is that even a small amount can be extremely toxic to a dog, even fatal. While initially sweet-tasting to your dog, it does have an extremely bitter aftertaste, however, since they tend to lap it up so quickly, and because it only takes a small amount to make them sick, it is often too late for the after-taste to discourage them from drinking it.

Because it is found in most households, poisoning from ethylene glycol one of the most common forms of poisoning in dogs. It is potentially fatal, affecting the dog’s brain, kidneys, and liver, and dogs of any breed or age are susceptible.

How Much Antifreeze is Toxic to Dogs?

Even a tiny amount of ethylene glycol can be dangerous to your dog. An amount as small as three tablespoons (roughly 50ml) is enough to kill a small dog.

Here is a chart you can follow with the approximate amounts of toxic doses of ethylene glycol:

Ethylene glycol poisoning happens quickly in dogs. The main issue is that the initial sweet taste of the substance will encourage the dog to drink a toxic amount before the owner can even notice it is happening.

Within the dog’s body, the ethylene glycol will be metabolized in the dog’s liver within a few hours which will create a substance called oxalic acid. This substance will then bind to calcium in the blood and form calcium oxalate crystals.

Eventually, these crystals will make their way to the dog’s kidneys, at which point the dog will become very ill. This may even lead to renal failure and can also cause sudden death. Because of the highly toxic nature of ethylene glycol, dog owners must be extremely careful when using the substance and be extra mindful of where they keep it stored.

Ethylene glycol poisoning can set in rather quickly after the dog consumes it and will actually occur in stages.

Ethylene glycol poisoning is most commonly thought by veterinarians to occur in two distinct stages, with stage one occurring within the first 12 hours of consumption and stage two sets in between 36 and 72 hours. Here are the common symptoms you can look for that may indicate your dog has gotten into some antifreeze and where they may be along the line of problems.

Stage One Symptoms: The First 12 Hours After Consumption of Antifreeze

The initial stage of antifreeze poisoning symptoms are the short-term effects of toxicity. These will occur just after the dog has had some antifreeze to drink, whether through a spill, a leak, or a used container that has residue. 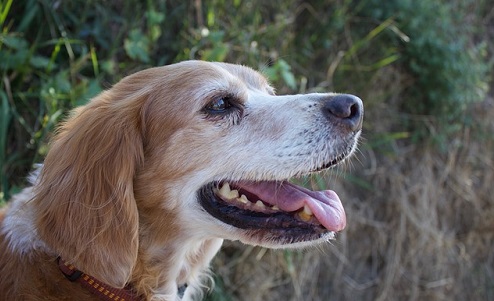 It’s important to note here that your dog may appear to recover from the first stage of symptoms after around the 12-hour point, but the ethylene glycol will continue to damage your dog’s kidneys. Unfortunately, this damage will be irreparable.

How quickly the signs of antifreeze poisoning in dogs appear and how intense the symptoms will be will vary depending on how much antifreeze the dog was able to drink. Symptoms may begin to appear as soon as 30 minutes after consumption while peak blood concentrations will occur three hours after ingestion.

The early symptoms of antifreeze poisoning will be similar to alcohol intoxication in humans. The most common stage one symptoms include:

Other signs and symptoms that are rarely seen in stage one include:

These initial symptoms may be difficult for an owner to spot, especially if your dog is primarily kept outdoors. The second stage of symptoms will set in next, typically showing signs 36 to 72 hours after ingestion.

The second stage of antifreeze poisoning in dogs will involve more severe symptoms. In spite of the fact that the dog may appear to go back to normal, there may be some real issues going on underneath the surface. However, whether or not a dog experiences stage two symptoms of ethylene glycol poisoning will depend on how much of the substance the animal consumed.

Most symptoms are acute in nature, but the symptoms of stage two antifreeze poisoning may include:

If things are bad enough, the ethylene glycol will cause a catastrophic situation in the dog’s kidneys, which will likely lead to canine kidney failure. Unfortunately, if things reach this point then the poisoning is terminal and the dog is likely to die.

If you suspect that your dog may have ingested antifreeze, then you need to seek veterinary treatment as soon as possible. The earlier you can act and get your dog the medical attention it needs, the more you improve his chances of survival.

Are Certain Dogs More at Risk for Antifreeze Poisoning?

There are no breed characteristics that make certain dogs more susceptible to antifreeze poisoning than others, however, as you see in the chart above, the bigger the dog, the more they are able to safely consume. But every dog will handle antifreeze poisoning differently, and the chart is merely a general guideline. 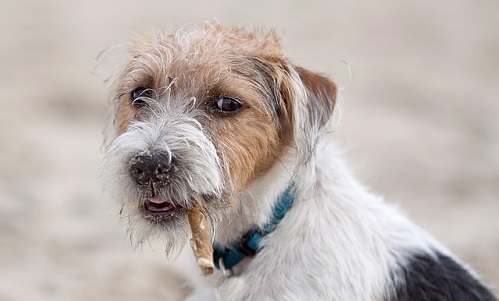 What makes a certain dog more susceptible to poisoning is his environment. Those dogs who have more access to antifreeze and other household products that contain ethylene glycol are more at risk to be poisoned because they are more likely to ingest those substances. Dogs that roam freely outside are also at an increased risk to come in contact with antifreeze or another substance containing ethylene glycol.

Cold climates, in particular, use more antifreeze and therefore put dogs in a more at-risk environment. As it becomes more and more common for car owners to flush their radiator fluid during the summer and fall, antifreeze poisoning is becoming more of a year-round issue.

How is Antifreeze Poisoning Diagnosed?

Much of a proper diagnosis will come from your observations. Your veterinarian will inquire about the symptoms you noticed and any incidents that may have contributed. Your vet will likely conduct a complete blood profile and urinalysis, and may also test vomit and stool samples if possible. The more detailed you can be about what symptoms you’ve noticed and what your dog may have consumed, the more quickly your veterinarian can make a proper diagnosis and begin treatment.

How is Antifreeze Poisoning Treated?

To prevent it from happening, the initial treatment will be to purge the substance from the dog’s body. Your vet may administer intravenous fluids to treat or prevent dehydration as well as increasing blood flow and promoting elimination through urine. This will help get rid of the ethylene glycol before it can do too much damage.

Bicarbonate is also often given to correct metabolic acidosis and restore the body’s pH level back to normal. Depending on the level of your dog’s consumption, extended treatment may be required for up to several weeks to fully restore kidney function.

Vomiting may also be induced by giving your dog a simple hydrogen peroxide solution, but this should only be done with the advice of your veterinarian. Nothing stronger should be used without veterinary consent. Also, once your dog has vomited, you should not induce further vomiting.

Regardless of if your dog vomits or not, you should still bring it into your veterinarian to safely treat the other symptoms of antifreeze poisoning.

How to Prevent Antifreeze Poisoning

You can easily prevent antifreeze poisoning from ever happening to your dog by taking a few easy precautions. Be aware of what substances in your home contain ethylene glycol and make sure the containers are tightly closed and stored in an area where your dog cannot get to them.

If you ever use antifreeze on your own, make sure you do your best not to spill any, but if any does spill, make sure you clean it up thoroughly and immediately. Make sure you also dispose of any used containers properly.

You can also make a habit of checking your radiator regularly and repairing any leaks as soon as you can. And always be mindful of your dog wandering unattended on roads or in your neighborhood to ensure he doesn’t come into contact with any antifreeze.

Lastly, make sure you purchase antifreeze with propylene glycol, which has been labeled safe by the U.S. Food and Drug Administration.

Antifreeze poisoning in dogs is not something you can shrug your shoulders at as a pet owner. It is easily preventable, but if it does happen to your dog, you need to be aware of these signs and symptoms and act fast if you notice any of these behaviors and suspect your dog has ingested antifreeze. A quick reaction can be the difference between your dog’s life and death.