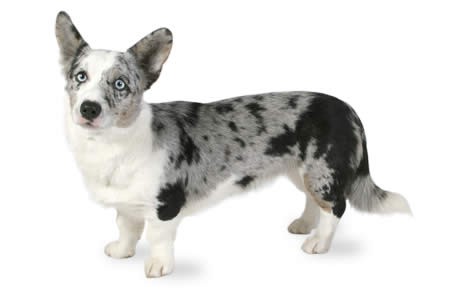 The Cardigan Welsh Corgi is an ancient breed that is believed to have been brought to Wales by Celtic tribes over 3,000 years ago. Cardigans were developed from the Teckel family of dogs, from which the Dachshund also descended.

The term corgi began to see use only in the 1920’s and was used to describe this type of low-slung heeler. Over the centuries, Cardigans were used as general-purpose farm dogs, guardians, and eventually became prized for their ability to drive cattle by nipping at their heels, or heeling. Cardigans are a medium-sized breed that was first recognized by the AKC in 1935.

Cardigans are an affectionate, adaptable breed that has served in many roles over the years. Today, they are mainly a companion breed, and they excel in this role. Cardigans have excellent manners and do well as house dogs, despite their prior use as a herding breed. Cardigans are a playful, intelligent, and intuitive breed.

This breed learns manners well, which makes them excellent house dogs. Their heritage as herders, which required them to think and act independently, does leave them with an independent streak. Cardigans should be trained and socialized from a young age to take advantage of their great characteristics.

Cardigans only need a moderate amount of exercise. A long daily walk is sufficient for this breed. If they have a fenced yard, they will get exercise running around it. They will also do well in a household setting and will play with other animals in the house. Be careful to limit jumping from furniture during the early years of your Cardigans life, as this can lead to health issues.

Cardigans can live anywhere between 12-15 years.

Despite being a relatively rare breed, Cardigans are currently the 69th most popular AKC registered breed.

Cardigans are known to have an insatiable appetite and will eat everything you put in front of them. This can lead to canine obesity very quickly, so be sure to only feed your pup enough to keep him at his optimal weight. An average sized Cardigan will eat between 1/3 to ¾ cups of dry food a day, split into two even meals.

Cardigans require weekly brushing throughout the year. During the two times a year when they shed, expect to brush this breed daily.

Cardigans are known to be good with older children. With younger children, they have a tendency to nip at them as they run by and loathe the loud noises that children sometimes make. Whether a Cardigan is right for your household depends almost entirely on the disposition of your specific dog.

As the cartilage wears down it is replaced with scar tissue and sometimes bone spurs. As your dog ages, hip dysplasia results in debilitating arthritis that is extremely painful and will eventually result progressively worsening canine lameness in the hind legs. Hip dysplasia can be assessed at a young age through a physical examination by a veterinarian.

PRA is a degenerative disease that affects the photoreceptor cells within the retina of the dog. Over time these photoreceptor cells begin to die, resulting in a diminished capacity to perceive light. The most common initial sign of PRA is a dog’s inability to distinguish objects dim light.

You may notice your dog bumping into furniture or doorways at night. PRA is a non-reversible condition, meaning that once it has begun it will eventually progress until your dog is completely blind. PRA affects both eyes simultaneously but is not a painful condition.

This disease is a degenerative condition that affects the spinal cord. DM results in progressively worsening function of the hind limbs, leading to weakness in the limbs and eventually paralysis.

In its early stages, symptoms of DM mimic those of arthritis. As the disease progresses, Cardigans will demonstrate progressive weakness in the hind legs and ataxia, or stumbling and wobbling. The exact cause of DM is unknown at this time. In December 2016 we were told she had cancer and had 2 to 4 weeks to live. Were it not for Canna Biscuits that might have been true. But that limp little Corgi came back to life. We hadn’t seen that much energy from her since she was a puppy. Every minute of this time was a gift to us and Chey. I tried various calming things with no good effect until Canna-pet. He hasn’t had an episode since I started him on it! I’m so excited and couldnt be happier to no longer have to see him like that. Since I have been giving him Canna-Pet treats every night I can see a huge difference in this mobility and comfort. We give him Canna-Pet daily to manage his general anxiety and in the week that he’s gone without, everyday Sgt. White Pepper has experienced more jumpiness, fear of sounds, and random barking outbursts. His weight is up and he acts like puppy. His obsessive paw licking has decreased; his paws are no longer raw or discolored! Darby has been on them for three months and she’s not scratching!