Shih Tzus are one of the most dynamic, misunderstood, and ancient dogs breed in existence. The name ‘Shih Tzu’ translates to little lion, yet this toy breed is anything but ferocious.

Truth be told, despite how dignified the Shih Tzu can be, how regal in appearance, or their heightened place in history (having been bred for Chinese royalty), these dogs are little fluff balls that just want to love and be loved in return.

This article is going to detail the exact personality and temperament you should expect from a purebred Shih Tzu, which is quite different than what people often suspect. First, however, it is necessary to know a bit about their history to be able to understand their nature.

Shih Tzus are one of the 15 oldest dog breeds in existence. Although it’s debatable just exactly when they came to be, experts often point to 8,000BC being when they were first recorded.

Despite the exact era, what is known is Shih Tzus were eventually integrated into the lifestyle of Chinese Royalty, often said that Tibetan Monks bred them specifically as gifts for those of most importance. For centuries and centuries, these small lion-like toy dogs were prized possessions amongst the nobility.

Although Shih Tzus are a proud, regal, and dignified breed, by no means are they arrogant or pompous. Their reputation of being one-person dogs is absolutely correct (often they choose who they love and stick to that) but when people depict Shih Tzus as aloof, snarky, or aggressive, then they’re referencing a dog that either wasn’t raised correctly, was a product of irresponsible breeding, or both.

In reality, the Shih Tzu personality and temperament is far from what you’d expect of a dog that could be considered ‘posh’ or ‘pampered.’ Their history has a large part in the making of their current reputation, but it should be known that a closer representation of the breed’s characteristics is loyal, loving, and attentive.

The personality of a Shih Tzu is a dynamic blend of the attentive and affectionate lap-dog, and the dignified companion. Within the home, these little pets just want to be part of the family. While their confidence can often be quite prominent, this isn’t to say that they’re arrogant. The one downside to a Shih Tzu is that they can be stubborn dogs. Bred to be the perfect companion, and to hold themselves with pride and assertiveness, when it comes to training and housebreaking these characteristics can make the process a bit more difficult.

There are plenty of accounts out there where inexperienced owners think training a Shih Tzu is going to be a breeze (because of their smaller size and loving rapport), only to find that it takes patience, persistence, and time.

With that being said, these little canines are charmers. The Shih Tzu personality is greatly influenced by their intelligence, as they process the world around them at a faster rate than most toy-dogs, and they love to learn.

Do expect an incredible socialite out of your Shih Tzu, and don’t expect them to be introverted or aloof towards others. This is a dog that strides through life with the confidence of a lion, is cautious but enthusiastic about strangers and unfamiliar environments, and expresses the unapologetic love of a Labrador within the home.

A Shih Tzu should never be aggressive. These dogs aren’t necessarily barky or nippy, but make fantastic watch dogs. While they’re not big enough to do any guarding, nor do they have a drop of ‘hunt’ in their blood, they’ll certainly alert you if you have a stranger coming to your home.

While the Shih Tzu isn’t necessarily all that playful, they’re always up for a brisk stroll around the neighborhood or some energy bursts within the home. One of the things that make the Shih Tzu such a coveted animal is their adaptability.

They can live in almost any environment (although they’re sensitive to extremes—like too much heat or cold, their coats aren’t built for it) and with most families. They can be a one-person dog, or the loveable family companion. They’re naturally confident, dignified, and affectionate. For a toy-breed, the Shih Tzu expresses one of the most well-rounded personalities. The temperament of a Shih Tzu changes drastically overtime. Generally, this breed is almost always too trusting. No matter what their age or how many experiences they’ve had, they love to trust others.

This means they’ll jump in the lap of strangers or they’ll leap headfirst into a friendly bout with another canine, regardless if that dog wants the attention or not.

This reverts back to their personality, as they’re extremely confident creatures, and don’t have any shame expressing themselves.

Another consistency is that they’re happy. If there’s one utility a Shih Tzu can serve as aside from your loyal little companion, it’s a therapy dog. Their general aura is happy, and they have an air of indestructible happiness that follows them like a shadow. Their contagious desire for love and to return it in the same fashion creates a levelheaded, lovely temperament.

This breed isn’t necessarily excitable as they are enthusiastic. They should never be snobby or aggressive towards others (or their owner) and generally exhibit traits that mirror bigger dogs. They don’t have a natural propensity for anger and aren’t easily stirred, although they can be a bit confused when people don’t return their same passion for life.

In terms of what changes overtime, it’s that enthusiasm that was mentioned earlier. The Shih Tzu—in their puppy years—want to throw themselves head first at just about everything. Their incredibly energetic temperaments at that age can certainly make them a handful.

They’ll want to meet any and all strangers, introduce themselves on their own accord to other dogs, and jump huge distances (like from the floor to the couch—often injuring themselves because they’re quite fragile).

As they age, this overzealous excitement wanes, and in its place rests the calm, loving, and well-mannered Shih Tzu the old Chinese Royals kept at their sides. Eventually, you might even have to become the motivator for your dog, as they’ll find a cozy spot on the couch and decide that’s their place to hang out for hours on end.

If there’s anything negative about the Shih Tzu’s natural temperament, it’s that their people-oriented tendencies can make them very clingy. While this is a toy-dog that can fit in even the smallest of apartments, their desire to love and be loved can turn to extreme separation anxiety in the absence of their owner.

If you’re someone that doesn’t have the proper time to care for your dog every day, then while the allure of having a tiny-sized loveable Shih Tzu in the home might be attractive, know that your time away could, in turn, create a very anxious, self-destructive, and unhappy dog.

Of course, this ‘negative’ trait they express comes from a place of just wanting to love, but they’re certainly a breed that suffers from separation anxiety. However, by in large, the temperament of a Shih Tzu is quite different than what toy breeds usually exhibit. They’re excitable in their youth, levelheaded, happy, and unapologetically trusting.

Irresponsible breeding is something that always needs to be addressed when speaking of personality and temperament. This is necessary, because a poorly bred pup—no matter how well they’re raised or trained—is going to have a propensity for bad behavioral patterns and irregular characteristics. 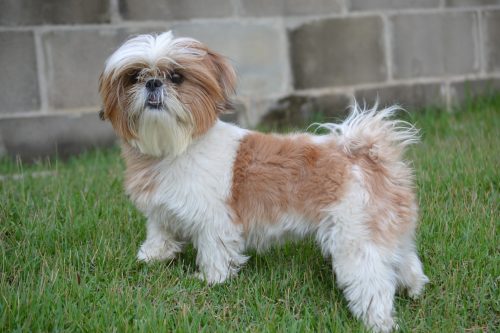 Since Shih Tzus are a very popular breed, there is a greater likelihood of irresponsible breeding. Do extensive research on the company/person you’re buying your puppy from.

Be sure that they can provide health clearances for the parents, and make sure the parents demonstrate the quintessential personality of the Shih Tzu breed.

Toy breeds often suffer from that pitfall of training neglect. This happens because their accidents aren’t as startling as bigger dog breeds and two, their home-like nature seems to need less attention than bigger dogs. But of course, this is not true. If you want your Shih Tzu to behave properly, it’ll take work.

Early-socialization is incredibly important with this breed. As soon as your puppy is in your life, be sure to expose him to different people, places, and other dogs. Breaking the ice and allowing them to grow comfortable within varying environments is key to establishing their natural confidence, and in turn creating a better-tempered dog.

Puppy classes are incredibly beneficial. Shih Tzus are smart dogs and they love to learn. As they learn, they do so develop their own identity. On top of that, Shih Tzus have a propensity to be stubborn.

If you’re going to teach your dog obedience on your own, then you might be in for a bit of a ride. A professional trainer will not only stimulate your Shih Tzu (and they do require a fair amount of intellectual stimulation) but they’ll also curb that stubbornness with a dexterous hand.

Another important aspect of training is to be there for your dog. Shih Tzus are known to suffer from separation anxiety a bit more than most breeds, and in their formative years it is especially important to spend a lot of time with them.

Sometimes Shih Tzus can get a bad reputation. People think the little lion-like toy breed is pompous and arrogant, when really they’re just confident and dignified.

All in all, they’re an incredibly happy, loving, gentle, enthusiastic, and social dog. Take those attributes into consideration with the fact that they’re also a toy-breed, and you have one of the best personality and temperaments possible.

Shih Tzus are incredibly adaptable, contagiously enthusiastic, and they’ll love you until the end of your days. While they can be a bit stubborn at times and suffer from separation anxiety, Shih Tzus are stellar dogs that are recommended for just about every type of owner.