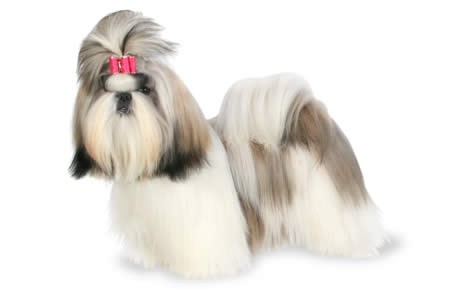 Based on DNA test, the Shih Tzu is known for being one of the most ancient breeds in the world. They are thought to have originated in Tibet and became popular in China where they were given the name Shih Tzu, meaning “little lion” or “little dog.”

In China, the Shih Tzu breed received a more stylized look as the Peking Kennel Club laid out the guidelines for proper breeding. The Chinese were mystified by the unique Shih Tzu personality and look. At the end of imperial rule in China, the dogs were fortunately brought to Europe, narrowly avoiding becoming extinct. All modern Shih Tzus descend from just fourteen dogs and were originally classified by English kennel clubs as Apsos. In 1935, the first European standard for the breed was developed, and the dogs were recategorized as the Shih Tzu. From there the breed spread throughout Europe and

In 1935, the first European standard for the breed was developed, and the dogs were recategorized as the Shih Tzu. From there the breed spread throughout Europe and was brought to America after U.S. military members brought them back from Europe. From there, their popularity increased around the world.

Shih Tzus are known for being affectionate, well-behaved, and alert. Known for being lap dogs, they are typically sweet tempered and enjoy companionship. Some owners have noticed it takes them a little longer to pick up on basic commands but this is just due to a slight stubborn streak and can be worked through with a little patience, consistency, and time. Normally relatively quiet dogs, Shih Tzus aren’t known to be barkers but will let you know when they hear a strange noise or if someone is at the door.

How to train a Shih Tzu

While Shih Tzus can be known to have stubborn and independent characteristics, but this doesn’t mean that they are impossible to train. Consistency and repetition along with praise will help you set them up for success from day one. It’s important to understand what motivates your Shih Tzu, is it a yummy treat? Or a belly rub? A natural companion, giving your Shih Tzu your attention as a reward can often be motivating enough- you just need to determine their motivation and leverage it consistently through conditioning.

Another key aspect of training is to break things down into simple tasks and make sure they have completely mastered one before moving on to the other. Try not to write your pup off as stubborn and realize that consistency and simplicity when training Shih Tzus is pivotal to their success.

How Much Exercise Does a Shih Tzu Need?

Despite being lap dogs, Shih Tzus enjoy walking and depend on a steady schedule of exercise to maintain a healthy weight. Although they are not the type of dog that requires a big yard to run around in all day they benefit from walks and play time. Whether you take them on a brisk walk or let them run around the beach or a park, they love to play and are always up for an adventure. As with most dogs, exercise can also help prevent and manage small behavioral issues. One important thing to remember about Shih Tzus is that they can become overheated quickly, so be sure and keep an eye on this during summer months and make sure they take the time to cool down and stay hydrated.

How Popular is the Shih Tzu?

Fairly popular, especially amongst smaller dogs, The American Kennel Club ranked the Shih Tzu as the 15th most popular breed in 2015, falling from 11th in 2013.

On average, Shih Tzus weigh 10 to 16 pounds. About 35 calories per pound they weigh is appropriate for adult dogs. As your Shih Tzu ages, you can ease up on the amount you feed them dropping it down to 30 calories per pound. Whether you weigh them at your home or the vet, it’s good to keep an eye on their weight as they age to help prevent any avoidable obesity-related health problems.

When your Shih Tzu is just a month old you can feel free to let them graze and eat throughout the day. However, once they are between three and twelve months old it’s good to get them on a daily feeding schedule.

How to Groom a Shih Tzu

If you are looking to show your Shih Tzu you will likely devote a good amount of time and resources to maintaining their longer coat. However, the average Shih Tzu owner will often opt for a simple short clip that is easier to maintain and often more comfortable for the dog. Either way, you’ll likely want to bathe them about every three weeks and carefully check their ears, clip their nails, and remove any matted hair as needed.

Are Shih Tzus Good With Kids?

A small dog with unaggressive behavior, Shih Tzus are great with children and can be a fun companion for your little ones. Affectionate and outgoing, they are the perfect size for your kids to play with and love the attention.

Charger had separation anxiety terribly from the beginning. The vet gave me a box of the canna-pet bones to see if they would help. So glad these helped so we didn’t have to use a medication! My wife and I researched many options and decided to try Canna Pet. He has been seizure free since beginning to take these supplements and his spirits have been lifted as well! I’ve had him on one (1) canna-pet small dog for several months now. His mobility is improved and requires very little pain meds. Woohoo! Thank you for a great product.

I knew I needed something more permanent (if it was out there), so I visited a local holistic vet who recommended Canna-Pet. I won’t deny I was skeptical at first, but after giving it a try, I discovered it was a life-changer! Mo has gone from having sometimes 10 seizures a month, to maybe 3-4 a year! I decided to try Canna-Pet max oil for my 14 yr old dog who suffers from seizures, which just started out of the blue this past December. Even with meds prescribed from the vet, seizures were still about 2-3 times a day! After about a week on the Max oil, his seizures have went down to about 2-3 per week! I had read about the Canna-Pet formulation to help treat anxiety and purchased some capsules to try. We now try to anticipate her triggers of anxiety and give her a dose ahead of time and it has worked wonders.