The Rottweiler is one of the most popular dogs in the USA, UK, and Canada. For good reason, too, as this breed is a wonderful blend of the loving house-dog and the steadfast protector that will guard your home and your children.

Not only that, but they’re relatively easy to manage within the homestead, as they don’t require vigorous exercise, and their intelligence makes them one of the easier dog breeds to train. Rottweilers are also relatively docile, and willing to learn at the hand of someone they love (although it takes a bit to build that trust for this breed).

A Brief History of Rottweiler Dogs The Rottweiler’s history is important to note while speaking of their personality because they were original breed as work dogs in the field. This breed had to be affirmative and powerful enough to evoke fear and drive cattle, and also remain the keen attentive watchdog. The Rottweiler breed seen back then does not exactly mirror the current Rottweilers seen today, but they still have some of those early characteristics.

The Rottweiler of today is a heavier dog — still incredibly powerful — with such large bones that they are often not fit for vigorous activity. This, of course, means they’ve kept the watchdog traits, are still incredibly athletic, but have lost most of their workmanship.

The Rottweiler is a dog once meant for the open plains, to exhaust their aggression (if they had any) and their muscles by driving cattle, and to always remain guarded. Now, Rotties are home dogs that don’t have the physique for stamina.

The Rottweiler breed often gets a bad reputation. You’ve probably heard — in one way or another — that Rotties can be incredibly aggressive, downright mean, and off-putting to other people. While these traits can certainly be true, and are perhaps a bit worse when it comes with a dog powerful enough to do damage, these traits don’t apply to most Rottweilers.

The personality of every dog depends on their upbringing, how they were bred, and the personality of their parents. These ‘bad’ personalities often come from poorly bred puppies that didn’t experience proper socialization.

The true personality of a Rottweiler, and what they were bred to be, is a mixture of the loyal, steadfast watchdog, and the incredibly loving homebody. Also, despite popular belief, the Rottweiler is actually one of the most intelligent dog breeds in existence. 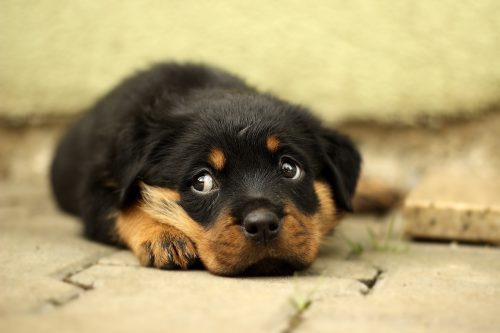 Their ability to learn, adapt to their environments, and their keen eye for their surroundings are nearly unparalleled. Not only that, but they’re also well-rounded within the home. They’re patient and gentle with children, and the more they grow to know them, the stronger their protective nature becomes.

Rottweilers are very cautious dogs, and people often see this as standoffishness or mean. This personality trait is rooted in their history. This breed was once a guard dog. They’re extremely reserved when it comes to others infringing upon those they love, but that doesn’t mean they’re not friendly. They’re simply aware of the situation, and know how they must react if they’re called to action.

The personality of a Rottweiler can also be considered needy. They love to be loved, and love to love, and often create a sense of dependency with their owners. Meaning these are not the dogs to own if you don’t have the proper time to be at home with them (or train them, as Rottweilers come with serious responsibility), as their separation anxiety will cause them to grow restless, nervous, destructive, and aggressive.

Rottweilers, while dignified, confident, and powerful, are also extremely sensitive. They take their owner’s mood as their own and will often become introverted in the hands of an owner that’s too dominant.

All-in-all, these dogs are fantastic companions (if raised properly), will protect the household in earnest, will love abundantly, and are great additions to a home with youngsters. Another thing to note about their personality is that they’re fearless. If they’re called to action, or feel they need to protect those they love, they never hesitate. There are slight differences between the two with this breed. For example, the male usually takes quite a bit longer to develop into his maturity, is more boisterous, and often a bit more mischievous.

The female, on the other hand, develops her self-awareness alongside her body, and is often known to a bit more docile, friendly towards others, and trusting. Males are often considerably more protective, which is, across the board the most common difference between the two of them.

The Rottweiler has a calm, levelheaded temperament that is only ever affected if they feel those they love (or themselves) are in danger. They’re obedient, and don’t tend to throw any temper tantrums when they’re younger. If they do, it’s easily curbed because of their respect for authority (which only stresses the importance on the owner establishing themselves as the alpha of the household).

Rottweilers are happy dogs and only become moody in the absence of their owner, or if they feel an absence of affection. They love to grunt, which is often confused for growling, but the truth is that they have a low mumble that sounds threatening when it’s really just them telling you they’re enjoying themselves.

As stated before, they’re certainly cautious of others, and won’t let a stranger walk into their backyard without them making their presence known, but they’re generally calm around other dogs and people. This calm and assertive nature is often confused with angry reservation, when in reality they’re completely comfortable in their environment and are simply keen on what’s unfolding before them.

The Rottweiler can be a dangerous dog in the hands of an unskilled or indifferent owner. They’re powerful enough to really hurt someone if an unreasonable emotion is triggered, and their fearlessness allows them to act upon these impulses. While early socialization and proper obedience classes should curb this completely, they’re certainly more prone to aggression than almost any other dog breed. At times this aggression can come naturally to them, with nothing about their upbringing or breeding having to do with it. Despite their grunting, which quickly becomes growling when they’re upset, these dogs can visibly show their aggression by snapping their teeth, showing their teeth, and barking excessively. Also, their body language tends to telegraph their anger, as they’ll face whatever it is they’re fearful of, lower their body, and hunch their back legs.

It’s important for dog owners that want to adopt a Rottweiler to be aware of this, and to take all the necessary steps in ensuring that their dog does not grow to become an aggressive adult. If your Rottweiler is indeed showing signs of canine aggression, it’s important to identify the source. Are they aggressive when they’re guarding their food? In the presence of Males? Females? In the company of other animals? Or is it fear?

Fear is obviously the most common cause of aggression in dogs, as they become guarded under pressure. Once you’ve identified that source, it’s important to know what gets them riled up, and then to slowly guide them towards facing this ‘fear.’

Passive leadership and a positive reward system is what will work best in curbing a Rottweiler’s aggression. This means that, when a Rottweiler is becoming aggressive, you should remove them from the situation but not to allot them any validity. If you try and become excessively dominant (or nervous/manic) when faced with their aggression, you’ll only feed the fire.

A simple tip is to ignore their aggression, and then only reward them once it’s gone. You should never heighten the situation with shouting, yelling, or extreme affirmation. Don’t pressure a dog when he is already in a frantic state, as that will cause your dog to react.

There are many things to be known when it comes to a Rottweiler’s aggression and how to mitigate it. Rottweilers are not overtly aggressive dogs, but they’re prone to demonstrate this behavior. If this behavior is not properly addressed, because of their size and strength, they can become dangerous pets to have in the household.

Tips for Raising a Happy Rottweiler

If you’re looking for a purebred, you need to be sure your puppy is coming from a proper breeder (who is notable for producing well-bred puppies). Be sure that he can provide health clearances for the parents, and make sure that you meet them, as their personalities will often directly reflect that of their offspring. Obedience classes are a must. Paying for a professional to train your Rottweiler could be the difference between a fantastic companion, and an introverted aggressive canine. The Rottweiler is intelligent enough to learn quickly and then take that knowledge to heart.

They’re not rebellious by nature, and so when they learn obedience, it sticks. If you double this by enforcing your own positive reward system at home, mixed with a subtle but affirmative hand, you’ll ensure that your Rottweiler respects authority.

Early socialization is a huge aspect of Rottweiler training. For a dog that’s naturally guarded, it’s important to break those boundaries by exposing them to environments, other people, and other dogs in their puppy years. If you familiarize them with the world, although they won’t lose their guard dog nature, they’ll be more comfortable in their setting, which produces better temperament.

You can socialize your pup by taking him on long walks, to dog parks, and constantly surrounding him with your friends. Even if you make all the right moves by sending your pup to obedience class, handling him well within the home, and making sure he gets proper exercise, if he is not socialized well he is entirely more prone to grow aggressive or poorly tempered.

Rottweilers are wonderful pets. They’re incredibly devoted, loyal, loving, intelligent, and protective. They make a wonderful addition to the family and they can be playful when they want to. Their docile nature paired with that astounding intelligence makes them an easy dog breed to house train.

With that being said, these are powerful dogs that can be dangerous if they grow aggressive. That’s why it’s incredibly important that this breed comes from a renowned breeder, is properly socialized, and goes through the full course of obedience classes to ensure that they’re going to have outstanding personalities and temperaments. Every dog comes with responsibility, but with the Rottweiler it’s even more apparent.

To learn more about Rottweilers and other dog breeds, visit our comprehensive dog breed guide!