Hearing a big word from your veterinarian is a scary experience, especially when you have no idea what it means. It instantly makes you think the worst: that whatever he just said means you have limited time left with your beloved companion

But when it comes to a condition like encephalitis, there is precedent for cautious optimism.

Encephalitis is classified as inflammation of the brain. This brain inflammation occurs when a dog’s immune system attacks its own brain. Encephalitis can occur on its own, but is commonly associated with other neurological diseases. What dogs get encephalitis?

Encephalitis most often occurs in dogs of the following breeds: Chihuahua, Yorkshire Terrier, Maltese, Pug, and German Short-Hair Pointer. It can affect dogs of any age, but young adult or middle-aged dogs have the highest occurrence. Causes of Encephalitis in Dogs

While encephalitis literally means inflammation of the brain, it actually is not a specific disease itself. Encephalitis can be caused by a number of different factors.

There are two broad categories of what causes encephalitis in dogs: those caused by infection and those that are non-infectious (often referred to as immune-mediated, or idiopathic). In dogs, non-infectious causes are much more common.

Unfortunately, what triggers immune-mediated encephalitis in dogs is poorly understood, but there is evidence to suggest that encephalitis is due to autoimmune disease. In normal, healthy dogs, the immune system recognizes harmful bodies and protects itself against them. When an autoimmune disease occurs, the process is reversed–the dog’s immune system will lose the ability to tell the difference between the outside bodies and itself, and will actually mount inflammatory attacks against itself. With encephalitis, a dog’s immune system will attack the brain and the membrane that surrounds it, also known as the meninges.

There are a few varieties of immune-mediated encephalitis in dogs, but granulomatous meningoencephalomyelitis (GME) is the most commonly diagnosed form. This primary inflammatory condition often involves all three of the brain, meninges and spinal cord. 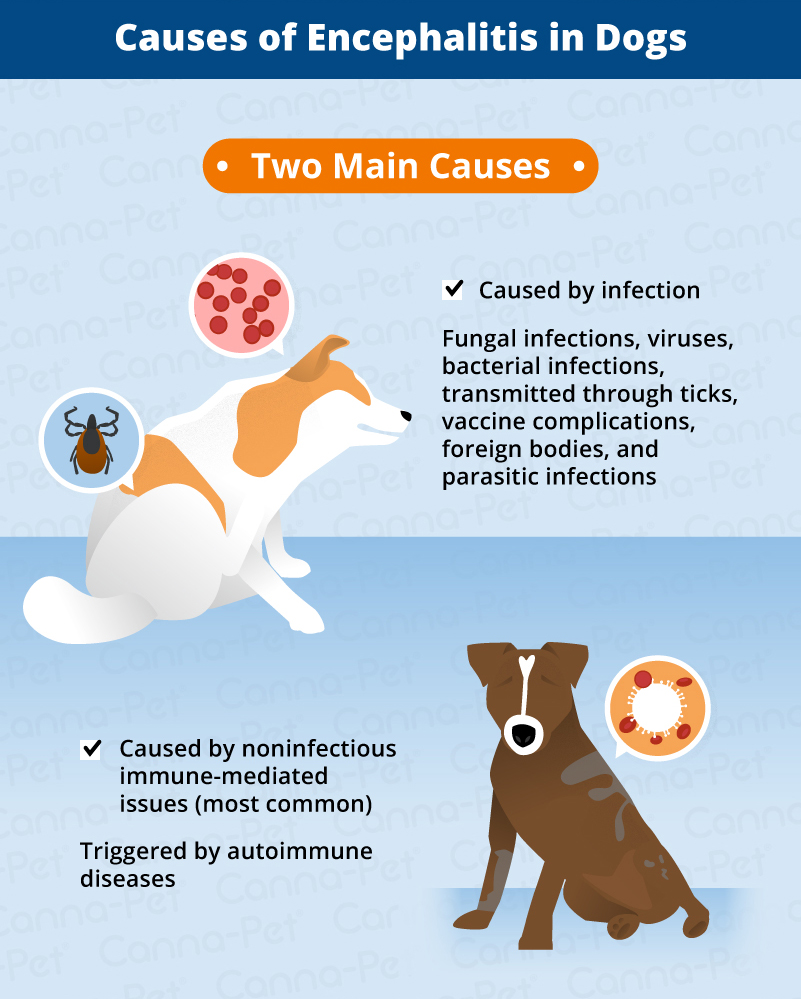 Encephalitis is less common in cats than it is in dogs, but with cats, the cause is more often infection-related. Further research into the causes and treatments for immune-mediated encephalitis is ongoing.

Regardless of the cause, encephalitis of any kind can be rapidly life threatening and should be diagnosed and treated as early as possible.

Symptoms of encephalitis will depend on the area of the brain that is affected. Typical signs include: 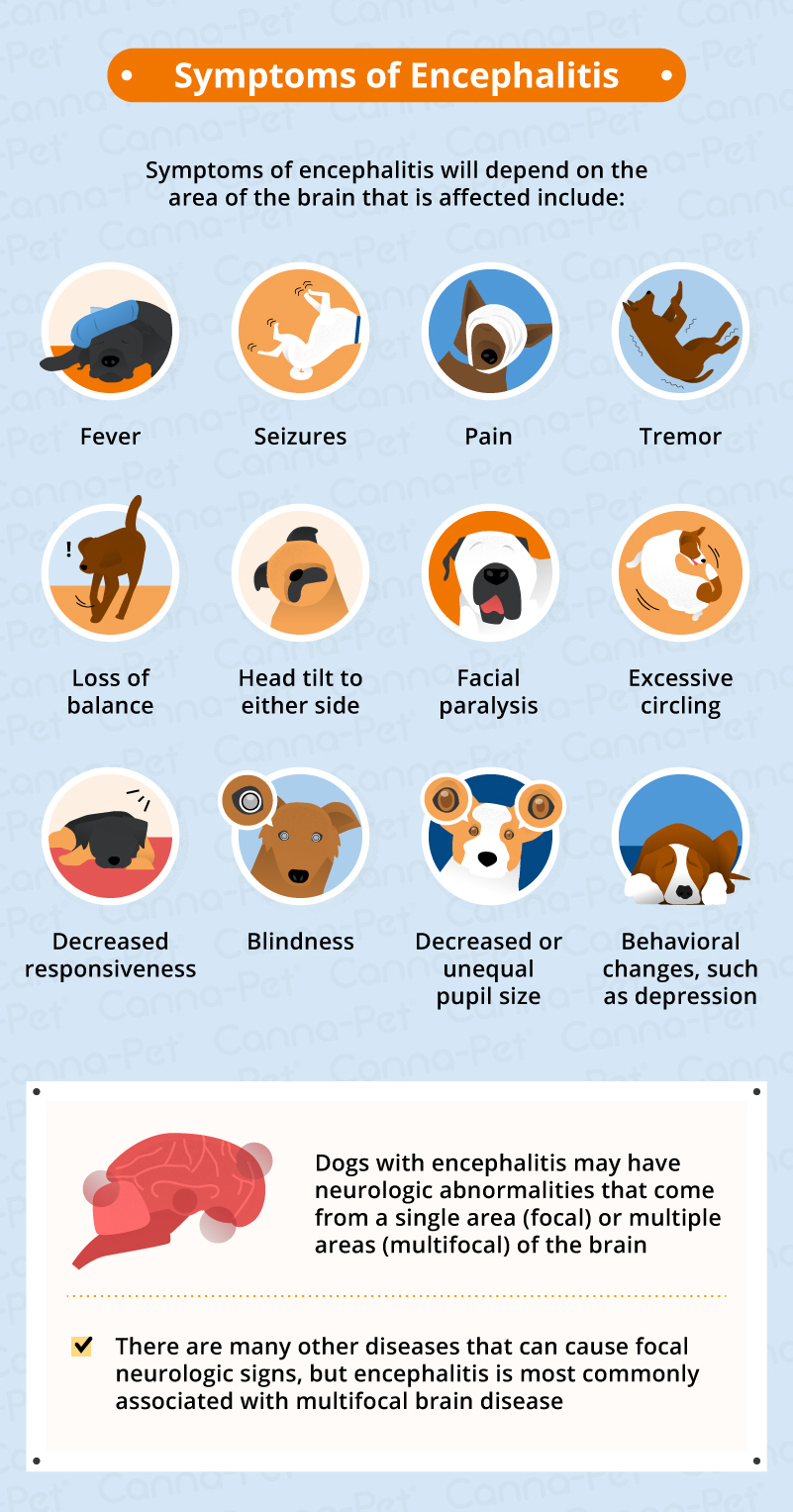 Signs of encephalitis may worsen as the disease progresses. Seizures, blindness, behavior changes, mental depression and circling are seen with encephalitis that affects the forebrain, or cerebral encephalitis). Loss of balance or incoordination, head tilt, tremors or facial paralysis are associated with brainstem disease.

Dogs with encephalitis may have neurologic abnormalities that come from a single area (focal) or multiple areas (multifocal) of the brain. There are many other diseases that can cause focal neurologic signs, but encephalitis is most commonly associated with multifocal brain disease. Other diseases that cause focal abnormalities include stroke or a brain tumor in dogs, so these will need to be ruled out in cases where the signs are singular.

When multiple parts of the brain are affected, multiple signs will be present. A complete neurological examination will need to be performed to determine the part of the brain that is affected.

Dogs that encounter encephalitis will typically see symptoms develop in a short period of time, usually within days to weeks. The onset can be sudden, and will generally progress rapidly.

How is encephalitis in dogs diagnosed?

Before any diagnosis can be made, you will need to give your veterinarian a detailed report on the onset and extent on your dog’s symptoms. This includes your dog’s breed, age, health history, symptoms, and any recent injuries that could provide an alternate explanation for the changes in your dog’s behavior. This could go a long way in helping your vet make a proper diagnosis. Because other neurological diseases often mirror the symptoms of encephalitis, a thorough round of testing will usually be needed. The veterinarian and/or vet tech will first give your dog an extremely thorough physical examination. This will be followed by a chemical blood profile, complete blood count and urinalysis.

These tests may reveal the possible infectious causes of brain inflammation. For instance, a decreased white blood cell count could point to bacterial infection as the cause. Viral infections may decrease the number of lymphocytes.

However, these tests are often not enough to diagnose encephalitis on their own. In these instances, MRIs and CT scans may be ordered to evaluate your dog’s brain structure and function. The vet may also sample your dog’s cerebrospinal fluid (CSF) and send it to a laboratory for expert analysis. The CSF test will usually determine the severity of the inflammation and give a definitive diagnosis.

The tests may reveal an uncharacteristically high density of white matter in your dog’s brain, or asymmetry, which are signs of inflammation. Together, these tests should be enough to give a positive diagnosis of encephalitis, but in other cases, an analysis of a brain tissue sample may be the only way to confirm the diagnosis. This is a dangerous procedure that can only be performed by a specialist.

When it comes to encephalitis, there is very little you can do on your own to treat your dog. The proper course of action is to see your veterinarian.

Treatment plans will vary on a case-by-case basis, but the course of action is generally the same. Your vet will first determine your dog’s symptoms, then put together a plan to help reduce their severity. Symptoms like seizures or brain edema will be attacked first to halt the progression of the disease. This plan may require your dog to be hospitalized and receive intensive care for stabilization.

In the less common cases where encephalitis is caused by a bacterial infection, your vet will treat the underlying cause individually, often through the use of a broad spectrum of antibiotics, which can reach the brain and spinal cord. Since encephalitis in dogs is more often thought to be an autoimmune disease, treatment plans will involve medications to decrease the brain inflammation and suppress the dog’s overactive immune system. Prednisone is often used to treat inflammation, however dogs treated with prednisone alone often will not survive for very long.

After initial treatment, your veterinarian will schedule regular follow-up exams to evaluate the effectiveness of the treatment and your dog’s overall state of health. The owner will be responsible for monitoring how the dog reacts to treatment in between visits and reporting your observations. Your vet will often recommend a new, strict diet for the dog, especially if he is frequently vomiting or severely depressed.

What is the long-term prognosis for dogs with encephalitis?

While encephalitis can be rapidly life threatening, the prognosis for dogs is often quite good if the problem is identified early and treated aggressively.

The prognosis for dogs with encephalitis will depend on a series of factors. These include how long the dog has been living with the disease, where in the brain it is located, the severity of symptoms, and how the dog takes to treatment.

Many dogs will respond well to treatment, and can extend their life by several years. When given proper treatment and care, dogs with encephalitis have seen their symptoms gradually improve within as little as two to eight weeks.

However, others may suffer relapses. Symptoms in some dogs may reappear after treatment has been discontinued, in which cases a second round of treatment, or long-term treatment, will be required to save the dog’s life. In other cases, dogs may not respond to treatment at all.

Whenever you encounter symptoms that you think might be indicative of encephalitis, make sure to bring your dog to see your veterinarian. Early diagnosis and aggressive treatment is vital to extending your dog’s life.