Home Blog General What Dog Breeds Are Prone to Seizures? Any dog breed can suffer from seizures at any point during their lives. There are multiple reasons dogs can have seizures, from blood pressure to diabetes to ingesting poison to congenital defects.

The most common cause of seizures in dogs, however, is epilepsy. While epileptic seizures in dogs can happen for a variety of reasons – including ingesting poison – genetics can play a big role. Some breeds are simply more genetically prone to developing epilepsy. “Idiopathic” epilepsy is a term used to describe a recurring seizure disorder in dogs that has no clear cause. It is also called “congenital” or “genetic” epilepsy. Signs of Idiopathic Epilepsy normally reveal themselves in young dogs from ages 6 months to 6 years.

For largely unknown reasons, certain breeds are more prone to inheriting Epilepsy. This genetically-inherited form of epilepsy is the most common cause if seizures in dogs, and affects various breeds of various sizes. Idiopathic epilepsy in dogs is genetic, and familial – meaning that it is common in certain breeds, and certain family lines. Though there are no clear-cut reasons why certain breeds are genetically-predisposed to epilepsy, the scientific community believes certain factors are at play.

Simple recessive inheritance – a genetic instance in which certain traits do not appear present in parent dogs, yet are passed on to the children – is the most common explanation for seizures in dogs. These traits are often inherited from both the sire and the dame.

Polygenic inheritance – where multiple alleles are needed to determine the makeup of a certain trait – are another predictive cause. In the case of polygenic inheritance, a dog would fall somewhere in between the risk scale of both parents. Dog Breeds That Are Prone to Seizures

The following dog breeds are most prone to seizures and Idiopathic Epilepsy:

Beagle: Friendly, social and entirely compatible with both humans and other canines, the Beagle is one of America’s favorite dogs. With a long lifespan of 12-15 years, the Beagle is a generally healthy dog. They are, however, one of the breeds most susceptible to seizures.

Keeshond: Cuddly and intelligent, the Keeshond (pronounced kayz-hawnd) is a favorite of the dog show set for its thick, multi-colored coat and knowing facial expressions. While not nearly as popular as the Beagle and others, the Keeshond is not uncommon. The AKC ranks it as the 85th most popular dog. While the dog is one of the healthier breeds out there, it is considered a risk for Idiopathic Epilepsy.

Belgian Tervuren: Alert, curious and intelligent, the Tervuren is a working dog that enjoys mastering tasks and solid exercise. This breed has been known to suffer from seizures, which can be disconcerting for owners used to an energetic attitude.

Golden Retriever: Golden Retrievers need no introduction. They’re the #3 most popular dog according to the AKC. Beloved family dogs with an unfazed personality and a permanent smile, the Golden Retriever is always a safe bet when it comes to temperament. The breed does, however, have various health risks – including epilepsy.

Labrador Retrievers: The undisputed king of popularity among dogs, Labrador Retrievers (including black, yellow, and chocolate) love to swim, fetch, and bond with their human families. Like the Golden Retriever, the Lab is a great example of a wonderful dog that tends to be genetically-predisposed to Idiopathic Epilepsy.

Vizsla: Highly energetic yet incredibly gentle, this medium size breed is gaining popularity. With a short and highly attractive coat, Vizslas have become a favorite for both dog shows and families. The breed’s high energy makes it a great hunter, but it may also be the reason it is prone to seizures.

Shetland Sheepdog: The “Sheltie” is an agility, tracking, and obedience master – as well as a favorite among dog owners. Seeing these balls of fur and energy suffer from a seizure can be heart-wrenching for their owners, but they are not uncommon in the breed.

These eight breeds, along with a few others including the Bernese Mountain Dog, Poodle, and Saint Bernard, show genetic predictors for epilepsy. If you own any of these dog breeds, you should bring them to your vet for testing and further information on what to do if your dog has a seizure, management, and treatment options. 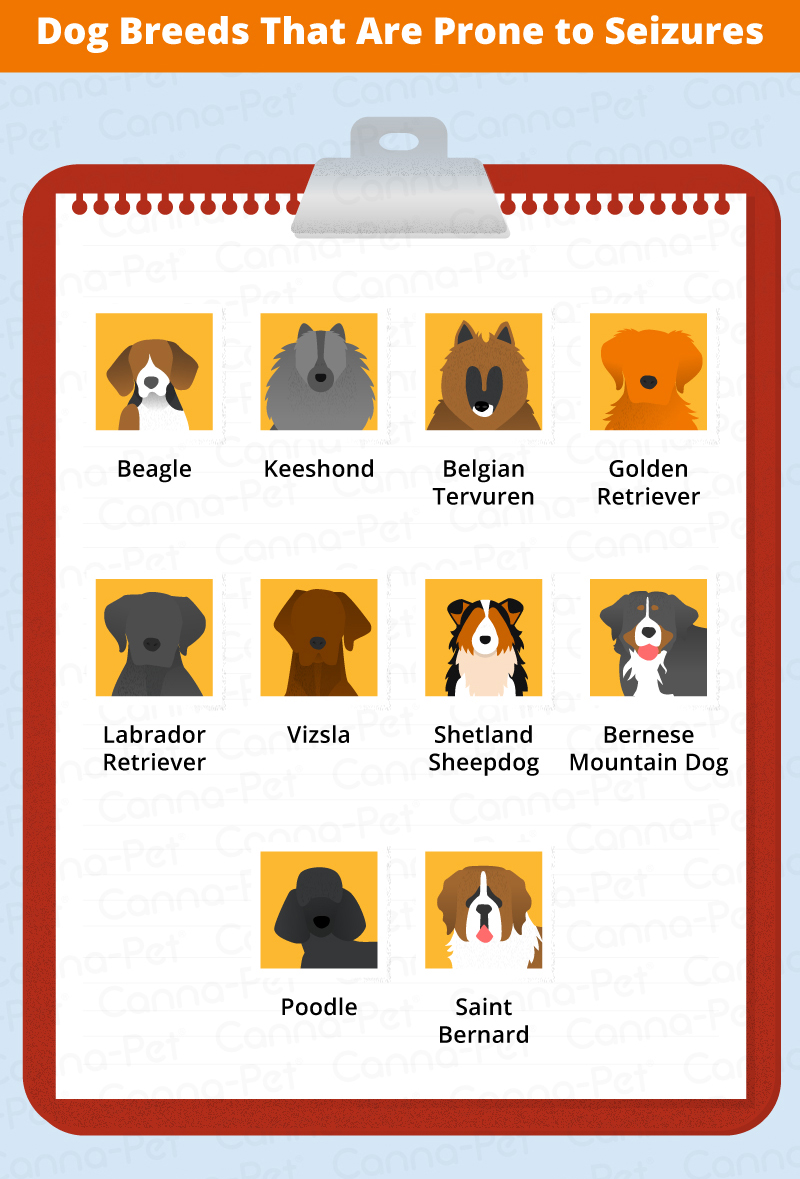