Home Blog General Can Cats get Parvovirus from Dogs? When it comes to parvo in cats, there are many misconceptions surrounding the parvoviruses. In order to understand the subtleties of the parvovirus as observed in cats and dogs, this article will take a closer look at the disease while addressing many frequently-asked questions and concerns.  So, can cats get parvo from dogs? Read on for helpful information, including signs and symptoms of species-specific strains of the parvovirus, how to protect dogs and cats, and other useful pet care tips.

What Are The Signs & Symptoms Of Parvovirus: Understanding The Virus Strains

In order to understand how parvovirus affects cats and dogs differently, we must first note the distinctions between canine and feline parvovirus strains. To clarify, Parvovirus is the common name applied to all the viruses in the Parvoviridae taxonomic family. However, cats and dogs each have their own separate parvovirus strains that are specific to their species. The cat strain is actually known as feline panleukopenia virus (FPV), and poses a serious threat of disease within the feline population.

Additionally, most research indicates FPV cannot be transferred to dogs. However, there are some studies that have shown that a mutated strain of the canine parvovirus (CPV) can, in fact, infect cats. So while it is uncommon, yes – cats can get parvovirus from dogs. For example, if a parvo outbreak in an animal shelter takes place, there is the possibility of cross-contamination. Consequently, if a cat has been in contact with a dog who has parvo, the cat should be considered potentially contagious and quarantined from other animals for at least several weeks.

So – what is the difference between the viruses?

According to veterinary and animal research, FPV and CPV differ only by 0.5% in their DNA sequences. Despite their similarities, however, each virus strain possesses its own acute characteristics: Feline panleukopenia virus (FPV): Also referred to as feline distemper, feline infectious enteritis, cat typhoid and cat fever, FPV is a life-threatening, highly-contagious viral disease among the cat population and is closely related to the canine parvovirus. This aggressive virus attacks blood cells in the body – mainly the cells located in the bone marrow, skin and intestinal tract. Essentially, the body’s defense cells are killed by FPV. In addition to anemic conditions, this virus can also put the feline at risk for other infections – both bacterial and viral.

Furthermore, it is a very resilient cat disease, and is capable of surviving for years in contaminated environments. As stated by the ASPCA, “Feline panleukopenia is a highly contagious viral disease of cats that can be found worldwide. Estimated mortality rates are 100% without treatment in young kittens – and even with aggressive therapies, are over 90%. The prognosis is better in older cats, but…many cats and kittens do not survive.” Therefore, FPV vaccinations have shown to be the best method of prevention among the feline population.

Symptoms for FPV include:

It should also be noted that FPV causes severe damage to the cells that line the intestines. In addition, it attacks the lymph nodes and bone marrow within the cat, resulting in shortages of all types of white blood cells (panleukopenia) and of red blood cells (anemia). Cats who are most at risk of developing severe FPV symptoms include kittens (between the ages of 2–6 months), pregnant cats, and immune-compromised cats.

The more common of the two is a highly-contagious gastrointestinal type of canine parvo known as CPV-1, which is distinguished by symptoms including diarrhea, vomiting, weight loss and a severe lack of appetite (anorexia). The other strain of parvo virus in dogs is the cardiac form known as myocarditis, also known as CPV-2 or heart inflammation. Often fatal, this particular strain attacks the heart muscles of canine fetuses as well as newborn puppies. Both strains of CPV are very dangerous to canines.

In most CPV cases, the virus is noted in puppies that are between the ages of six and 20 weeks old, but occasionally older animals are affected. Fortunately, the incidence of canine parvo infections has been drastically reduced since the 1970s, when canine vaccinations and boosters for puppies became the norm. It is therefore of utmost importance for pet parents to follow a basic vaccine schedule for dogs in order to prevent canine parvo and other dangerous diseases.

Symptoms for CPV include:

While CPV can be found in nearly any type of environment, not every puppy or dog who comes in contact with the virus will become infected with it. In fact, several components factor into the equation for a dog to get sick, including his immune status and the number of viruses he’s been exposed to. In other words, in order for a dog to be affected by the canine parvo, there needs to be the ‘perfect storm’ of factors in place. If such a case occurs and the dog does become infected, a certain sequence of events is triggered as the parvovirus attacks the dog’s body.

According to the American Veterinary Medical Association (AVMA), the names feline distemper and feline parvo shouldn’t be mixed up with canine distemper or canine parvo – even though their names are similar, they’re each caused by different viruses. In addition, the viruses do not infect humans.

Similarities & Differences In Parvo For Cats & Dogs: What To Know

Similarities: Feline & Canine Parvo: Although the feline and canine strains of parvo are not exactly the same, the primary similarities between the virus for cats and dogs are two-fold: how it is spread and the high infectious rate. 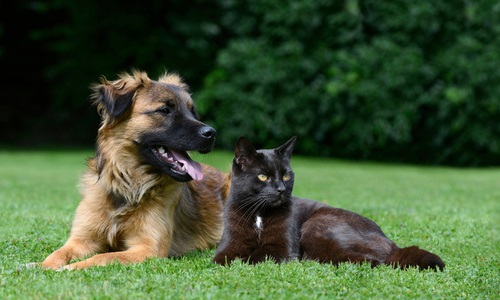 In dogs, the canine parvovirus is very contagious and spreads through various means, including direct dog-to-dog contact, or dogs who have contact with contaminated stool (fecal matter), environments, or people. Parvo in dogs is easily transmitted from place to place, and the virus progresses rapidly: in fact, the majority of parvo-related deaths in dogs take place between 48-72 hours after the appearance of the symptoms listed earlier.

In cats, panleukopenia (aka feline parvo) is also highly contagious and may spread from cat to cat in a few different ways: either direct contact with another infected cat, or transmitted via contaminated objects, such as a caregiver’s unwashed hands, food and water bowls, toys, clothing and bedding. For unvaccinated cats, the virus can be fatal between 48-72 hours after the initial incubation period.

In both cases, cats and dogs must be kept in isolation if infected. In addition, all of their belongings – including food and water dishes, blankets and toys – must be thoroughly cleaned and disinfected to avoid further spreading of the viruses. Because the method of spreading the illness is the same for canines and felines – via contaminated objects, a caregiver’s hands, infected kennels, bodily fluids and/or feces – it’s crucial to disinfect all surfaces for the treatment and recovery of affected animals, as well as a preventative measure to keep both types of virus strains from spreading.

Yet another similarity between canine and feline parvo: the symptoms of the infection. Both forms include symptoms such as severe diarrhea and vomiting, gastrointestinal disturbances, high fevers, and the potential for fatality due to the severe dehydration and secondary infections caused by the virus.

Differences: Feline & Canine Parvo: Although there are many similarities between feline and canine parvovirus, it’s important to remember that dogs and cats have different strains of the virus. In addition, dogs have the potential to be exposed to not one but two separate strains (CPV-1 and CPV-2). For canines, parvo treatments consist of boosting the dog’s immune system until he successfully fights off infection. In the case of felines, treatment entails intravenous fluids and antibiotics in some instances in order to give the cat the best survival rate; in fact, the chance of the cat’s survival truly depends on the quality of his veterinary care. Research has shown that for both dogs and cats, preventative measures are a much more effective approach versus treating an already sick animal. The standard conventional form of parvovirus prevention is vaccination. While vaccination isn’t a guarantee that a cat or dog won’t get infected with the parvovirus, it drastically limits the odds of it happening. In any case, it’s essential to follow up with a trusted veterinarian regarding any type of parvo treatment for cats and dogs, including vaccinations, health precautions, and other ways to protect a beloved pet from this dangerous family of viruses.

Tags: can cats get parvo from dogs, parvo in cats