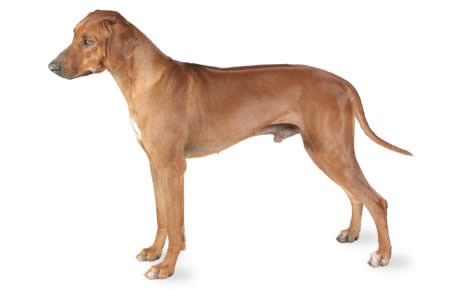 The Rhodesian Ridgeback breed originated in the early days of South Africa. Also known as the African Lion Hound, it was first a canine used by South African Boer farmers. At the time, they were in need of a dynamic hunting dog that could withstand extremes, work long hours with little water, and were still affable enough to return home and be the family’s pet.

They began by crossing Mastiffs, Greyhounds (and an assortment of other hounds), and hunting dogs with a wild ridgeback dog kept by the Khoikhoi, a native tribe that originated in southwestern Africa. While we don’t know exactly which dog was favored in this breeding process, we do know that they eventually produced a canine apt enough to assist them on their lion hunts (hence the nickname Lion Hound).

As with most specialty breeds, eventually someone committed to ironing out the line and creating guidelines for the purebred specimen. For Rhodesian Ridgebacks, that man was a hunter named Cornelius Von Rooyen—in the begging of the 20th century—who began his breeding program in Zimbabwe (used to be Rhodesia). In 1922, a breed standard had been published. Two years later the South African Kennel Union recognized the Rhodesian Ridgeback breed.

Once the breed became specified and gained popularity in Africa, it eventually found its way into the US post-WWII, where it was recognized by the AKC in 1955

The temperament and personality of a puppy Rhodesian Ridgeback and an adult one are polarizing. In their puppy years, they’re characteristically hyperactive, full of enthusiasm, and affable. However, in their adult years their need for activity lessens, they’re a bit more reserved, and they often develop a more introverted personality.

The consistency between these two different phases is that no matter puppy or adult, this canine has intelligent, confident, and independent characteristics. The breed has not shifted much since it was first recognized in South Africa; there’s a lot to be said about the fact that these dogs used to keep lions at bay for hunters. To that point, this breed has a particularly high prey-drive. They have a tendency to chase around other animals, smaller children, and constantly remain on ‘the hunt.’

These dogs tend to be a handful in the beginning, then reward their owners by maturing into level-headed, loyal, and well-rounded companions with an even temperament.

Quite a bit of work goes into training a Rhodesian Ridgeback. A simple Google search will show you that they’re often used in competitions, shows, and hunting bouts. Many times, owners that purchase this breed do so for a calculated reason and are prepared to train them in a certain fashion. With obedience training and housebreaking, you’ll have your hands full. The exuberant energy and high prey drive blend can be a frustrating one. First order of business in training a Rhodesian Ridgeback is patience.

Early socialization and puppy classes are a necessity with this breed. They’re not naturally docile, and in fact can be both resilient and stubborn when it comes to training, meaning they need an early start. Just as well, since these are intelligent hunting dogs that will challenge their master, the owner must establish themselves as the alpha of the household. Positive reinforcement mixed with affirmative discipline is the recipe for a trained Rhodesian Ridgeback.

A Rhodesian Ridgeback puppy needs a lot of exercise. It varies depending on the dog, but typically they’ll need around an hour or so a day. They love to run, hike, and hunt (which usually means they’ll run around the yard digging holes or chasing birds). As they age, they become drastically less active and prefer a few brisk walks and some alone time strolling around.

These dogs need constant stimulation. Exercise is a perfect time to introduce games, teach them tricks or commands, and incorporate obedience training. As with most hunting dogs, when they’re bored, they’re destructive and rebellious. Keep them active and engaged to mitigate this problem.

A common misconception with the Rhodesian Ridgeback is that due to their initial requirement for exercise, that they’re outdoor dogs. However, the breed we know today is not. While they should have access to a yard and be taken out daily, they should live indoors with their families and can even adjust to apartments (if they’re in an apartment they’ll need to be exercised more often).

All said and done, know that a Rhodesian Ridgeback is a competent companion when it comes to outdoor activities. They’re athletically built, have incredible stamina, and love to explore. This breed is your best friend when it comes to extensive hikes or long bike rides through town.

The Rhodesian Ridgeback is 42nd in the AKC’s most popular list of 155 registered dog breeds. While they’re not a perfect fit for everyone—being that they’re a lot of dog—these steadfastly loyal companions, and intelligent hunting dogs are amazing additions to the family with enough time to devote to their dog. They’re great adventurers and full of enthusiasm and will reward their owner by becoming mature and affable adults.

Feeding Requirements for a Rhodesian Ridgeback

The recommended amount to feed a Rhodesian Ridgeback is around 2-4 cups of dry food per day, split into two even meals. Although this breed is not prone to become obese, it’s still important that you monitor the balance between their food intake and their activity level. Just as well, due to their high metabolisms, it’s important to purchase the highest quality food for this breed, as they’ll often eat more than they exercise.

As with all dogs, it’s important that age, metabolism, and weight are all factors that are considered when creating a balanced diet for your canine. Similar to how a Rhodesian Ridgeback will become lazier in their adult life, they’ll also need to eat less to counteract that.

A Rhodesian Ridgeback’s coat is shiny, not too dense, and easy to groom. If they’re outdoor dogs, they’ll shed more (although they should be indoor), but keeping them indoors mitigates the problem. They usually come in gold and reddish gold coloring, with black muzzles, ears, and black fur around their eyes.

To mitigate any shedding, you’ll want to brush your Ridgeback weekly with a rubber curry brush and then wipe away the dead hair/skin with a damp cloth. They’re not prone to producing too much odor, and that’ll usually only occur if they’re outside playing in something smelly. Do note, their hair is short, so when grooming these thinner coats, be careful to be both delicate and cautious.

As with all dogs, brush their teeth 2-3 times a week to avoid tartar and bacteria buildup. Clip their nails as needed, as you can’t always expect this breed to wear them down naturally. To ensure optimal Rhodesian Ridgeback health, check their ears, eyes, mouths, nose, and bodies for anything suspicious (inflammation, infection, parasites, redness, unusual coloring).

Bathe your Ridgeback as needed. No routine bathing is required. These dogs have rougher coats – they don’t necessarily need to be pampered (although this doesn’t mean they’re to be ignored).
Ridgebacks can be stubborn when it comes to the grooming and checkup process. Be sure to start them off early and incorporate the sessions into obedience training.

Are Rhodesian Ridgebacks Good with Kids?

While Rhodesian Ridgebacks vary in their temperaments with children, they’re generally noted for having patient and gentle personality traits. They often grow to be protective of the little ones and enjoy their company when at home. Thing is, these dogs have the hunt in them, meaning when the children play they’ll often chase them a bit too vigorously, or nip at them.

It’s important with breeds such as the Rhodesian Ridgeback that the owner introduces the dog and the kids early on, then teaches them both how to properly interact. A well-mannered Rhodesian Ridgeback is still a powerhouse of a dog capable of toppling a child if playing too roughly. This needs to be disciplined. However, by in large, they’re a suitable companion for the younger ones.

A healthy breed, Rhodesian Ridgebacks life expectancy stretches to over a decade. But they’re not immune to health complications or illness. That’s why it’s important that a breeder provides health clearances for both of the parents. These clearances should be administered by certified establishments. Some possible Rhodesian Ridgeback health problems are as follows:

Hip Dysplasia: this is a big one in heavier set dogs, and it occurs when there’s a displacement between the thigh bone and the hip joint. It can cause severe pain, difficulty walking, lameness in the leg(s), and at worse immobility. Thankfully, hip dysplasia can be screened for, making it all the more important to have health clearances for the parents. There are numerous treatments available for this condition.

Elbow Dysplasia: in the same vein as the aforementioned condition, this occurs when there’s displacement between the elbow joint and the bone. It’s not as crippling as hip dysplasia, but can still cause pain or lameness and at the very least difficulty straightening the arm. There are multiple treatments available for this condition, and often the dog will adjust its gait to compensate for the weak arm.

Dermoid Sinus: this is a congenital skin defect in which a growth occurs in the spinal area. It can actually worsen to the point of puncturing the skin or digging into the muscles connected to the spinal cord (a serious problem). Often, a dog with this condition will be put down. However, others are cured with surgery and able to lead healthy, happy lives afterward.

National breed website: The Rhodesian Ridgeback Club of the US
Rescues: Ridgeback Rescue Your CBD allows her to calm down and to rest without pain. She takes a CBD capsule every morning and evening. It allows her to sleep at night and to walk with her Dogpark friends everyday. My 9yr old Rhodesian Ridgeback mix tore both of his ACLs in his life. I have tried numerous CBD oils and never really saw a huge difference until I used Canna-Pet CBD oil. We have an 8 year old, 125 lb Rhodesian Ridgeback who was diagnosed with mast cell cancer about 3 – 4 months ago. He’s been getting Canna-Pet twice daily. We’ve found no more tumors & he’s feeling great. Even wants to play with his 2 year old son. Since being on the canna pet capsules the swelling of both have dramatically improved. Nowadays when it even starts to rain or looks like it’s going to pour I give them each their biscuits and they both are much more relaxed and calm!