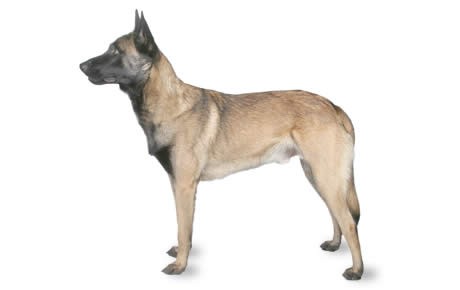 The Belgian Malinois—one of the four Belgian sheepdogs—originated in Belgium in the late 19th century. After a group of breeders met in Brussels to narrow out the variations of the sheepdogs and classify the specific breeds, they succeeded in recognizing the Belgian Shepherd Dog in 1901.

However, the dog recognized then is not the Belgian Malinois breed we currently have today. The ancestry of the current breed dates back to a Laeken—one of the four Belgian sheepdogs—named Vos I. Vos I, who lived towards the end of the 19th century, was then bred with another Laeken named Lise, and when the daughters of the litter grew, Vos I then inbred with them. It is said this inbreeding produced the gray and brindle colored Belgian Malinois that is present today.

With striking intelligence, a strong work-ethic, and a naturally athletic frame, breeders began to train their Belgian Malinois for work outside of agriculture. By the beginning of the 20th century, they were the first dog to ever be incorporated into the Belgium police force. Then came WWI, and the dogs were enlisted and used as messengers, Red Cross dogs, medic dogs, and even supply dogs (meaning they carried guns and supplies on harnesses).

After WWI, with the growing popularity of the breed, the Belgian Malinois was then exported to several different countries, including the USA. Often times, American soldiers would return from their tour with their own Malinois pets. But their rise to popularity in the states was debilitated by the Great Depression, and then the following world war, and only once worldly affairs simmered, the economy stabilized, and people could afford to spend time focusing on the breed. By 1959, the breed was recognized by the AKC.

The Belgian Malinois is an extremely intelligent working-class dog. Their temperament and personality directly reflect their ancestry. Always attentive and aware, the Belgian Malinois processes information at an almost uncanny speed (hence why they became police dogs). They’re affectionate and loving with their family members, and will ‘test the waters’ with strangers before deciding they’re comfortable.

The Belgian Malinois personality is also dignified and protective. While that’s a great attribute to their character when it comes to protecting the family or household, it also means they can be stubborn. If not properly trained, they can be prone to challenging their owners and causing mischief. They’re smart enough to do so, thus it’s important to keep the upper hand early on.

You shouldn’t expect any aggression or shyness on this breeds behalf, but that’s why early socialization is incredibly important for Belgian Malinois behavior. Their air of reservation and the dominant hand they like to keep in situations could manifest into poor behavior if they’re not properly exposed to different environments, other canines, and people.

The Belgian Malinois is a highly trainable breed, being that they have a high intelligence. Of course, this doesn’t mean the path to a well-trained Malinois is an easy one, but to reinforce that if done properly, they’ll respond well. It’s important that from the get-go the owner establishes himself as the alpha of the household. This stubborn, hyperactive breed will tend to rebel if they feel an absence of leadership. To this point—being that a Malinois requires an immense amount of attention and activity—they’re not good dogs for first-time owners or owners that cannot dedicate a good chunk of each day to their canine.

Positive reinforcement mixed with affirmative obedience training is the perfect blend for a well-trained Belgian Malinois. You’ll need to find the balance between the reward system and the punishment system. Puppy classes are an absolute must and so is early socialization.

Being that these dogs are hyperactive when training them, be prepared to spend a lot of time outdoors. These dogs crave stimulation. They’ll need an equal amount of physical and mental exercise to keep them rested and levelheaded.

Exercise Requirements for a Belgian Malinois

The general rule of thumb for a Belgian Malinois’s need for exercise is they should spend an hour a day running around, walking, or simply playing in the yard. These dogs are absolute workaholics. Especially in their puppy years, they’ll need a lot of activity, or else they’ll become restless and nervous.

One of the most coveted traits of a Belgian Malinois is their natural resilience. They can handle just about any physical activity; after all, they did carry guns for soldiers in WWI. This means they’re an incredible companion for long hikes, outdoor adventures, and vigorous playing.

Being that they love to be stimulated, this also means they enjoy many games. They’re huge fans of fetch and Frisbee and will be delighted to develop a closer relationship with their owner and experience their release at once.

Popularity of the Belgian Malinois

The Belgian Malinois ranks 47th on the AKC’s most popular list of 155 dog breeds. While they’re steadfastly loyal, confident, and intelligent, their workaholic tendencies and need for exercise make them a great pet for some, but not all. This is a breed that requires not only a lot of time spent outdoors but ample time for training and stimulation. They’re not your average house dog and don’t act as such. Despite this, their rise of popularity has been increasing since the 1950s.

The recommended daily amount for a Belgian Malinois is 2-3 cups of high-quality dry food per day, broken into two equal meals. Do note, they can be fickle about their food choice, and their fast metabolisms will often require more than expected. This of course should be leveraged against their activity level.

Age, weight, metabolism, and the amount of exercise a dog receives are all important factors in administering a balanced diet. Take each of them into consideration when deciding on the appropriate portions for your canine, no matter what breed.

The Belgian Malinois has short, thin hair. It’s usually tightly packed and rough to the touch. The rough top coat paired with the thick undercoat makes them extremely weather resistant (especially being that they can store heat for longer periods of time).

Normally, they’re brindle or maroon colored and have black faces, which almost gives them a ‘masked’ appearance. Their ears and hair tips are normally black as well. Similar to many gorgeous coats, the Belgian Malinois tends to shed. In fact, they’re not even seasonal shedders; they shed year round. Weekly brushing with a brindle brush will help mitigate the problem.

Bathe these dogs as needed, not regularly. Their coats are built for wear and tear, meaning they don’t need excessive pampering. Brush their teeth 2-3 times a week to avoid tartar and bacteria buildups. Cut their nails as needed, but normally their activity level and lust for exercise will wear them down naturally. Check their ears, mouth, nose, eyes, and bodies for infection, inflammation, redness, or parasites. Introduce these checkups early in their puppy years, and incorporate them into obedience training.

Are Belgian Malinois’s Good with Children?

A Belgian Malinois is great with children if introduced early on. If they’re properly socialized, and create an immediate relationship with the young ones, they’ll grow to be protectors, lovers, and the most loyal of companions. Thing is, the ‘herd’ in the dog can cause them to be a bit rambunctious with the youngsters (they’ll nip, chase, and try to herd the kids when first playing). That’s why early socialization and obedience training is so important with this breed.

A Belgian Malinois that is full grown and has never been around children, however, might not be the most suitable dog for little ones. Instead, these types of Malinois should only be fit for older kids—those of which know how to appropriately handle the canine, and the way to properly interact.

The Belgian Malinois has a long life expectancy and is famous for being exceptionally healthy. They’re working dogs bred to last. Unfortunately, this doesn’t make them immune to illness or disease. As with every dog, it’s important that the breed can provide health clearances—administered to the parents—upon the date of purchase. These clearances should be given by certified establishments. The conditions that can afflict a Belgian Malinois are as follows:

Hip Dysplasia: this condition occurs when there’s a displacement between the thigh bone and the hip joint. It can cause extreme pain and discomfort, lameness in the leg(s), and at worst immobility. This can be a hereditary condition, and it can be screened for. Make sure the parents passed their screening. There are treatments available for this condition, and often the dog will adjust their gait to compensate for the weak hip.

Progressive Retinal Atrophy (PRA): this condition occurs when the photoreceptors in the back of the eye begin to fail. At first night-blindness ensues, and eventually as the condition worsens, the dog will lose complete eyesight. Being that this condition can be diagnosed well before the blindness phase, it allots a decent amount of time for the owner to prepare the household—and for the dog to begin to rely on other senses for navigation.

Elbow Dysplasia: similar to hip dysplasia, this condition occurs when there’s displacement between the elbow joint and the bone. It can cause extreme pain, lameness in the leg(s), and difficulty straightening the arm or walking. Thankfully, there are multiple different treatments for this condition, and often the Belgian Malinois will adjust to the condition. The product helps control our pup’s high anxiety. I’ve been especially pleased with the support we received while fine-tuning the dose and identifying just the right product.

My beloved Belgian Malinois Simba has been on Canna-Pet for 90 days now and it has helped so much.