Home Blog General What is the Cocker Spaniel Lifespan? The Cocker Spaniel is one of the most popular dog breeds according to the American Kennel Club’s registration statistics. They are medium-sized, active sporting dogs, the smallest spaniel breed and the smallest dog in the sporting group. Cocker spaniels are known for their long, flowing coats and low-set feathered ears. As with any dog, Cocker Spaniels easily become part of their human family and leave many owners wondering, how long do Cocker Spaniels live?

Progressive Retinal Atrophy (PRA) in dogs is a condition which causes your pet’s retina to deteriorate over time eventually leading to canine blindness. Though this condition does not directly lead to a shortened lifespan, a blind pet may find themselves in more dangerous situations which could lead to further complications.

Cataracts in dogs are similar to PRA in the sense that they lead to decreased visual capabilities in your pet, however, this is an opacity or cloudiness of the lens of the eye rather than a deterioration. Small cataracts may not bother your Cocker Spaniel, but thick or dense ones may lead to impaired vision, blindness, or glaucoma in dogs. Patellar Luxation, also known as a floating kneecap, occurs when your dog’s patella, or kneecap, dislocates or moves out of its normal position. This is usually painful for your pup and may result in lameness. A luxating patella will lead to a ruptured cranial cruciate ligament in at least 15-20% of dogs with patellar luxation.

Elbow Dysplasia (ED) in dogs is a disease of the elbows which is caused by growth disturbances in the joint. Some possible causes of ED include defects in cartilage growth, trauma, genetics, exercise, and diet.

Gastric Torsion, also known as canine bloat, is a serious condition of the stomach and can be fatal if not treated immediately. The stomach becomes swollen, distended and very hard, usually as a result of abnormal volumes of gas, food or fluid. As the stomach swells, twisting can sometimes develop between the esophagus and the upper intestine.

Epilepsy in dogs is a neurological disorder marked by sudden recurrent episodes of sensory disturbance, loss of consciousness, or convulsions, which are associated with abnormal electrical activity in the brain. The resulting seizures of epilepsy can put your dog in harm’s way if not treated properly.

In addition to the conditions listed above, other minor health problems that Cocker Spaniels can suffer from include cardiomyopathy, ectropion, urinary stones, otitis externa, canine hip dysplasia (CHD), hypothyroidism, seborrhea, phosphofructokinase deficiency, “cherry eye,” liver disease, allergies, and congestive heart failure. As with serious health concerns, these conditions can be treated by your vet and your Cocker Spaniel will continue on to live a long happy life for his entire lifespan.

What About the Different Breeds? 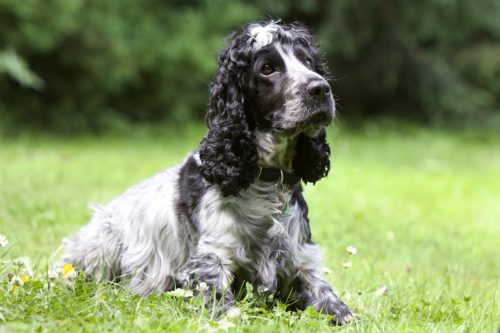 Any pet owner dreads the day their furry friend will no longer be with them, but fortunately, Cocker Spaniel owners should have many years with their pet before that becomes a reality. With excellent care and a watchful eye, you can catch any health conditions which may try to prematurely shorten your Cocker Spaniel’s lifespan. As issues arise, consult your veterinarian for treatment options. Together, you will be able to find the best plan for your dog’s health.