It can be just as nerve-wracking to watch a dog experience a seizure as it can be to watch a human experience one. And just like with humans, seizures in dogs can occur randomly and infrequently, with no rhyme or warning, or they can plague your pet frequently and predictably.

Dog seizures can be mild and virtually undetectable, or severe, coupled with strong shaking, and everything in between. Sometimes they can occur in clusters, where your pet will experience several seizures in the same day.

Dogs who experience frequent and violent seizures lasting for long periods of time that are unable to be controlled by common treatment methods may be euthanized as a kindness.

This is because when a dog experiences multiple seizures on a regular basis, there is a higher probability of brain damage. This creates an increased likelihood of more seizures, and it becomes a vicious circle. Quality of life then becomes the primary consideration.

Interestingly, when dogs are excited, about to eat, or when they are falling asleep or waking up, their brain activity changes. This changing brain activity appears to be what can trigger canine seizures, despite the dog appearing completely normal otherwise.

Sometimes dog seizures can be triggered by trauma, others by toxin exposure, compromised organs, blood issues, genetic problems, brain tumors, and a myriad of other causes. When the exact source can’t be pin-pointed, the seizures are simply called idiopathic.

While there are many types of dog seizures, they are typically classified in one of three ways.

Within those classifications, a dog may have several types of seizures.

This type of seizure involves the whole body and results from both hemispheres of the brain misfiring. Your dog may lose consciousness and fall, their limbs may twitch and jerk or extend with rigidity.

Your dog also may stop breathing. After 10-30 seconds, your dog may paddle their legs, chomp their jaw, involuntarily defecate or urinate, salivate, bark, whine, or otherwise vocalize, and their pupils may dilate. 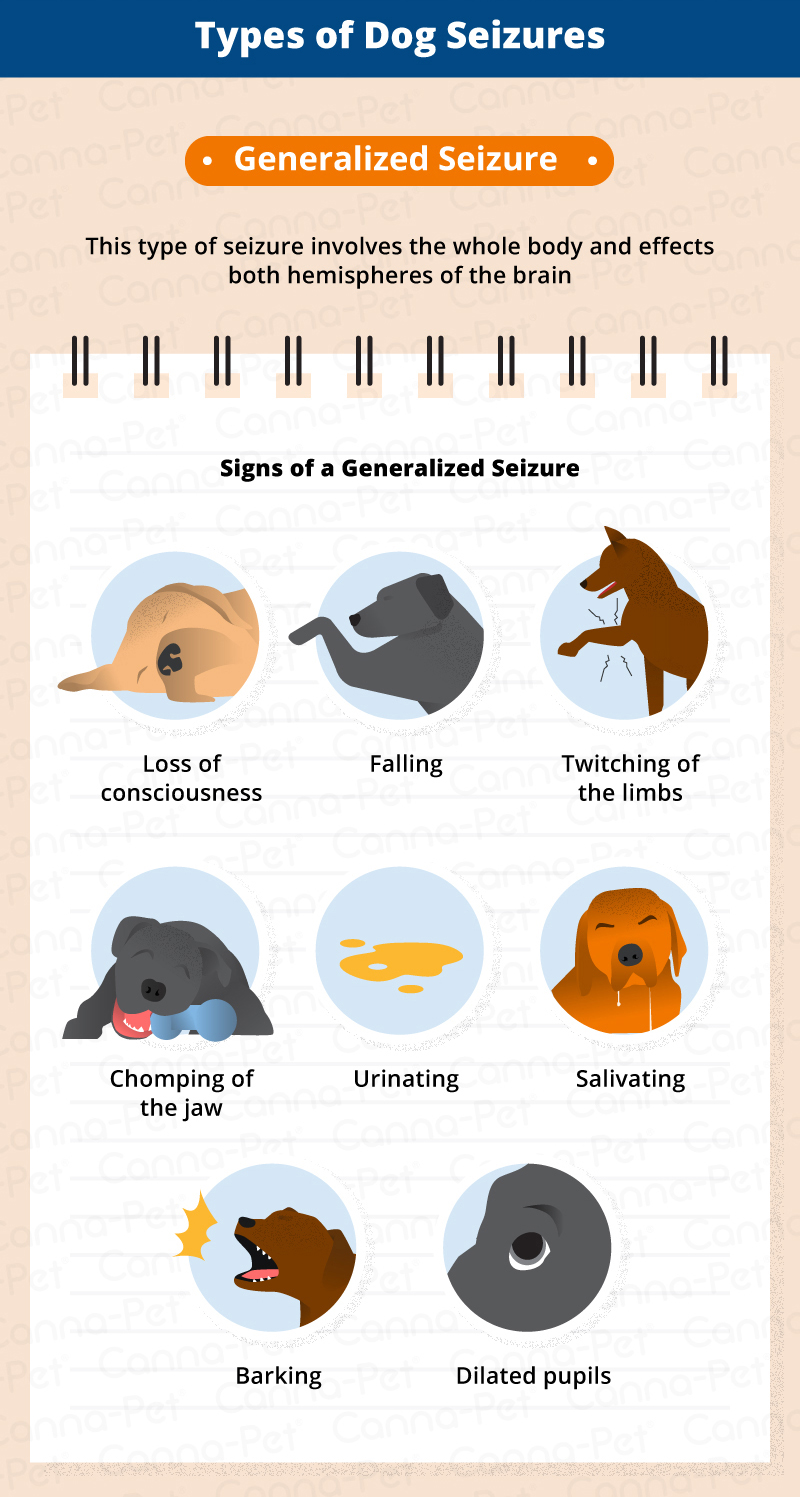 If the seizure is mild, loss of consciousness may not occur, and there may be very little limb extension or paddling. The entire episode can last anywhere between 30-90 seconds in total, and recovery, although sometimes immediate, can also take up to 24 hours.

Also sometimes called Grand Mal seizures, this is one of the most common types of seizures found in dogs. Symptoms can occur well before an attack itself, sometimes days beforehand. Anxiety, irritability, dizziness, weakness, and mood changes are some of the warning signs that your dog may suffer from a grand mal seizure. Most often associated with low levels of blood sugar and salt, or drug toxicity, grand mal seizures in dogs generally last around a minute.

During a tonic seizure, your pet will experience non-vibratory muscle contractions. You usually see this in their legs, as they will flex and relax. This type of seizure is abrupt and can last anywhere from 10 seconds to a full minute. They most often occur when a dog is drowsy or in non-REM sleep.

This type of attack often goes hand in hand with tonic seizures. Sometimes called ‘drop attacks’ your pet may suddenly go limp and lose consciousness for a brief time, around 1-2 seconds, coupled with rapid recovery.

This type of dog seizure is rare, and typically presents in canines with elevated temperatures. Your dog may lose consciousness suddenly and jerk and spasm, with muscles contracting and relaxing for up to a minute.

Petit mal seizures are sometimes referred to as absence seizures, and they aren’t very common when it comes to dogs, if they are recognized at all. If your pet does experience a petit mal, you may notice them staring, they might lick their lips, or their eyes might roll upwards.

Sometimes they shake their head back and forth, or their whole body will tremble uncontrollably. Some dogs become quiet and just blink, but regardless of symptoms, petit mal seizures are always brief, barely lasting a minute. However, if these types of seizures aren’t treated, they can recur numerous times and can turn into grand mal seizures.

With this type of seizure, your dog’s muscles will contract rapidly, and their pelvic muscles and facial muscles may jerk or twitch. This type of dog seizure is most often seen in younger dogs suffering from idiopathic or symptomatic epilepsy.

This type of seizure is characterized by localization, and is explained as simple or complex, depending upon the dog’s level of awareness when it occurs.

Your dog will usually remain conscious during a simple focal seizure, although the level of consciousness will be more impaired during a complex episode. Focal seizures occur when a small area of nerve cells in one hemisphere of the brain misfire.

Some indications of a partial or focal seizure in dogs include:

There are many causes of partial seizures, such as tumors, trauma to the head, brain infections, congenital abnormalities, and stroke.

Your dog may show symptoms such as dilated pupils or their hair standing up. Vocalizations such as growling, barking, or moaning, and involuntary movements may occur. Specific muscles may contract and relax, and your dog may show signs of vision or hearing changes, balance problems, or even suffer from disturbances and hallucinations. Your dog may bark or growl at nothing, bite at the air (fly biting) or behave fearfully for no discernible reason.

The complex partial seizure in dogs is thought to be similar to what people experience. Your dog may stare motionless, then experience a period of abnormal or bizarre behaviors right before a generalized seizure takes place.

Your dog may exhibit oddities such as aggression, hysterical running, cowering, chewing and chomping, as well as things like salivating, flank biting, abdominal distress with vomiting and/or diarrhea, vocalizing (barks, growls, whining/moaning), and abnormal appetite and thirst.

Your dog probably won’t lose complete consciousness with this type of seizure, but you may notice they seem dazed or unaware of what they are doing. It is possible for their unusual symptoms and behaviors to linger anywhere from several minutes to hours.

A series of seizures within a short timeframe, interspersed periods of consciousness. Sometimes cluster seizures in dogs are mistaken for status epilepticus, but they are not the same thing. However, both conditions are dangerous and can threaten the life of your dog, so treat them as emergencies. This type of seizure can be easy to confuse with cluster seizures. Your dog may suffer several seizures in a short timeframe, similar to cluster seizures, except without regaining normal consciousness in between them.

Or they could suffer one long seizure, lasting 30 minutes or more, and your dog may or may not lose complete consciousness. Status epilepticus can affect dogs with a history of epilepsy, as well as dogs with no prior history of seizures. It’s very dangerous and can result in death or brain damage if not treated immediately to stop the seizure activity.

Seizures, when they occur, typically happen in a series of ‘phases’.

This phase may occur days or hours before the actual seizure event, with changes in your pet’s behavior and mood becoming evident.

During this phase your dog may seem nervous, and may seek you out for affection or try to hide, as if they can sense the seizure that is coming. Whining, salivating, pacing, running, and trembling are all signs of this phase, which can last seconds or hours.

The ictus phase can last anywhere from a few seconds to five minutes. Your dog may pass out during this phase or experience a marked change in mental awareness, as well as involuntary actions and spasms.

Foaming at the mouth, twitching, chomping, drooling, and urination or defecation are all symptoms of dogs having a seizure. If the seizure is prolonged for longer than 5 minutes, your dog may be experiencing status epilepticus and require immediate emergency treatment.

During this phase, your dog may be confused or disoriented, and may pace or behave in a restless manner, or become unresponsive. Your dog may walk in circles or wobble on their feet and bump into things, display compulsive behaviors, or wander aimlessly.

Temporary vision loss can occur, hearing loss can occur, and excessive salivation can occur. Increased thirst or hunger is also common in this phase. This phase can linger for days, or last only minutes. Since seizures typically happen very early in the morning or during the night, this is the phase most often seen by pet owners.

Seizures can quickly turn into a life-threatening health condition if they aren’t monitored closely and taken seriously. If your dog is having a seizure, try to keep the external environment as quiet as possible. Loud noises and bright lights could make the episode worse or trigger additional seizures.

Pay attention to the passage of time so you can record how long the seizure lasts and pass that information along to your vet. Remember to remove other dogs out of the room if your pet is seizing, as the episode could upset them and cause them to try to attack the dog that is seizing.