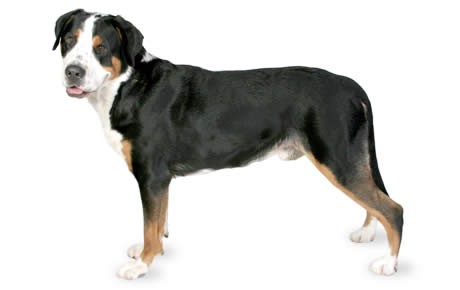 Originating from the alps of Switzerland, the Greater Swiss Mountain Dog thrived at both their herding and guarding skills. Because of their impressive size, this working breed is believed to be derived from a similar family to the Mastiffs. They were also one of the oldest dog breeds in Switzerland, which made them a popular companion during the 1800’s.

It wasn’t until 1968 that this breed finally made their way to the United States. While they didn’t gain immediate popularity through their introduction, they did grow at a slow and consistent rate throughout the years. By 1995, the American Kennel Club recognized the Greater Swiss Mountain Dog as an official breed in the United States.

Gentle yet confident, the Greater Swiss Mountain Dog can be a loving companion or a trusted watchdog. Their alert personalities make them the perfect guarder of the family, ready to warn their loved ones at the first sign of an intruder.

Even though they are very observant, they can love to be a devoted member of the family. They take their relationships seriously and need the attention from others to stay happy. Most owners of a Greater Swiss Mountain Dog will say that they are good-natured and work very well in a family setting.

Although smart, the Greater Swiss Mountain Dog can be a hard breed to train at times. They mature slower than other breeds, and will still have their puppy personality and tendencies well into the age of 3 if not properly trained.

Professionals recommend obedience training starting at a young age to combat their independent nature. Since this breed is so large, it is important that they learn how to interact with other people and animals as early on as possible.

The Greater Swiss Mountain Dog also needs early socialization. Introduce them to new people, places, sounds, and experiences while they are still a puppy. This will help to create a well-rounded and behaved pet later on in their life and reinforce the behaviors that are expected of them.

Although a large breed, the Greater Swiss Mountain Dog does not need a lot of exercise on a daily basis to stay healthy. In fact, this breed tends to overheat if overexerted, and should not be overworked or be exposed to hot weather conditions.

Instead, it is important that this breed is mentally stimulated through games in activities. Whether it be agility training or any other type of coursing, this breed craves all jobs and challenges that test their mental ability.

On average, the Greater Swiss Mountain Dog lifespan is between 10 to 11 years.

As said before, the Greater Swiss Mountain Dog has gained a slow and steady popularity within the United States since its introduction back in 1968. Today, the American Kennel Club ranks this breed as the 78th most popular dog breed in the United States.

Considering their massive size, the Greater Swiss Mountain Dog requires 4 to 5 cups of high-quality food a day, split into two equal meals. Especially for large dog breeds, make sure to feed them a diet that is designed and created to support their growing muscles and joints. Aside from their food, make sure to have a bowl of fresh water readily available at all times.

Luckily for owners, the grooming regimen for a Greater Swiss Mountain Dog is fairly easy. Their thick double coat should be brushed twice a week, and requires a bath every month or two. Along with their coat grooming, brush their teeth weekly to prevent bacteria and tartar build up. Lastly, always check their ears and eyes for any early signs of infection.

As long as the dog has been socialized at a young age, the Greater Swiss Mountain Dog can be a great companion for children. However, keep in mind that their massive size may be too overbearing for a small toddler. That is why many professionals recommend that the child be old enough to know how to properly treat and care for their pet.

Just like with most larger dog breeds, these dogs can be prone to several health complications. Common Greater Swiss Mountain Dog health problems include:

Hip Dysplasia: Hip dysplasia is a common hereditary problem that affects larger dog breeds. This occurs when the hip socket and thighbone are abnormally formed, causing grinding and rubbing within the joints. Eventually, hip dysplasia in dogs can lead to arthritis in severe cases.

Swissy Lick: This strange condition occurs when the dog begins to lick or swallow anything around them. While there is no known cause for this happening, many believe it is the result of gastrointestinal pain.

Gastric Torsion: Gastric Torsion, or bloat,  is a common complication that affects deep-chested, larger breeds. Bloat in dogs occurs when the dog’s stomach fills with air or gas, then rotates, adding extra pressure to nearby organs. Once this happens, the dog is unable to belch or vomit, which can then cause a restriction of blood circulation to the heart, leading to death. If you believe your dog may be suffering from bloat, take them to the veterinarian as soon as possible.

Distichiasis: This Greater Swiss Mountain Dog eye condition occurs when the dog develops extra upper or lower eyelashes. These malformed eyelashes then cause irritation to the cornea.