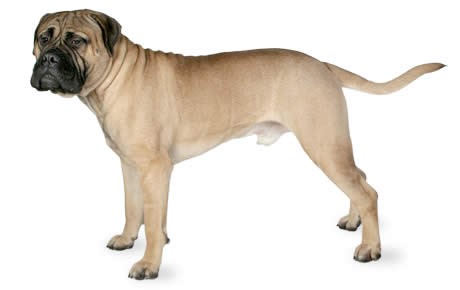 The Bullmastiff breed originated in the middle of the 19th century by English gamekeepers that needed a competent dog to track down poachers. Some characteristics the dog was bred for were to be fearless, powerful, large enough to do damage, and quiet enough not to be spotted. Experts say there were an array of different crossbreeds tested for this agenda, but it was the Bullmastiff that proved the most worthy.

The Bullmastiff then became the Gamekeeper’s night dog, constantly working to keep away poachers. When the poaching crisis in England began to dwindle, they settled into the role of a guard dog. Due to their mastiff heritage, they also developed darker coats the more time went on.

By the 20th century, the Bullmastiff was bred as its own breed, creating a multigenerational heritage. It’s in this same time period that the dog was imported to the US, where they were recognized as an independent breed by the AKC in 1933–just a few years before the climate of the world changed. Although their rise to popularity was a slow burn, the Bullmastiff breed eventually solidified their presence and are in the upper range of most popular dog breeds in the US.

Bullmastiffs are best thought of as gentle giants. They’re guard dogs by nature, built to pack a punch but not necessarily to endure, and they’re intelligent. Despite their size, these are homey dogs that are best served living comfortably indoors with the family. They’re reliable, docile, and often quiet and don’t bark. Intimidating to look at, these dogs don’t react unless provoked. You won’t find any testament of a Bullmastiff’s overt aggression, rather they’re quick to the trigger if they feel that their loved ones have been threatened.

Their reserve is often only in the comfort of strangers, and when it’s only the family or those they care about they have an incredibly affectionate personality and just want to love. Loyal beyond measure, what they covet most in life is time with their family. They’re definitely have a shy temperament, not one that’s going to bustle with enthusiasm at every moment, and despite being a home dog will need plenty of exercise (especially because they can become obese if not properly motivated).

The downside is these are big dogs and without proper attention, they can become destructive. If they’re nervous or feel neglected, they have a tendency to chew the house up. Just as well if not properly socialized, that guard dog personality can become aggressive towards other people and animals.

Bullmastiffs–plain and simply–require early socialization and puppy classes. With a dog this powerful and given their nature, you’ll want to do everything in your power to create a well-behaved, levelheaded adult. They’re docile creatures, so as long as the right steps are followed, housebreaking and training a Bullmastiff is within reach. However, that doesn’t mean they’re an easy breed to train.

Bullmastiffs can have stubborn and sensitive personality traits. It’s the owner’s job to establish themselves as the alpha of the household immediately and to keep a firm but not aggressive hand over their canine. They respond best to positive reinforcement for good behavior, because they love to be loved, and will do what they can to please their owner.

They’ll need to be motivated to exercise (especially in adulthood), but can be spunky when they’re younger. It’s important with this breed to do the proper research before beginning the training process, and then to keep a consistent routine ongoing. Also, make sure the house is properly prepared for a dog that weighs over 100 pounds.

Although you’ll see it recommended that a Bullmastiff exercises around 30 minutes per day, plenty of owners say that’s simply not enough. Bullmastiff’s don’t like vigorous activity, and will instead walk at their own pace and take their time sniffing things. Now add their proneness to obesity in the equation, and it’s very likely your canine can become lethargic and overweight.

Thus it’s important to keep your Bullmastiff active. Take them on brisk walks throughout the day, then devote a good chunk of it to motivating them. Their coach-potato-like tendencies aside, they actually love the outdoors (it’s in their blood) and will develop more energy if kept on a consistent exercise routine.

It’s important to keep them engaged, too. Teach them fun games, commands, tricks, and stimulate their intellects during these periods of exercise. You want a fully stimulated Bullmastiff, as their restlessness can turn inwards if persistent for too long.

The Bullmastiff ranks 48th on the AKC’s most popular list of 155 dog breeds. While they’re above average, the reason they’re not in the top 40s is because, well, they’re massive dogs that sit around. They’re perfect for the owner that wants a guard dog but doesn’t want to invest hours on end outdoors with their canine, and needs to leave them at home at times. Still, their nature with children, loyalty, affection, and their protectiveness make them a favorite for many.

Feeding Requirements for a Bullmastiff

The recommended amount to feed a Bullmastiff is anywhere from 3-5 cups of dry food per day, cut into two even meals. These dogs can be glutinous about their food and will overeat whenever given the chance. It’s important to mitigate weight gain by keeping the Bullmastiff motivated to exercise, or reducing their portions to keep them balanced.

As with all dogs, weight, age, and metabolism are all important factors to consider when administering a balanced diet. No two dogs are going to have the same build or the same requirement for food. Know your dog, keep track of their weight gain, and consider all factors when feeding them. Also, be sure to buy the highest-quality food when it comes to a Bullmastiff, as they need the proper nutrients to age properly.

The Bullmastiff sports a short but thick coat that offers good protection from harsh weather conditions. It’s resistant to the cold and doesn’t become too stuffy in the heat. It’s usually reddish, dark, or brindle colored. No matter the coloring, usually Bullmastiffs have black muzzles and dark ears.

Coat upkeep isn’t a challenging endeavor when it comes to this breed. They don’t shed too much, a weekly brushing with a rubber curry usually mitigates the condition (while a daily brushing can rid of it all together).

Bathe them as needed. They don’t tend to produce odor because they’re not ones to roll around in gunk. Brush their teeth 2-3 times a week to avoid tartar and bacteria buildups. Trim their nails monthly, as you can’t count on them to wear down naturally. Check your dog for any signs of body, mouth, ear, or eye problems (redness, inflammation, infection, and parasites). Touch their paws, legs, and probe their bodies. Begin this process early on so to accustom the dog to the grooming process and the hygiene checkups. This will lead to a better-tempered adult, and one willing to be patient throughout the process.

Are Bullmastiffs Good with Children?

Bullmastiffs are great dogs with children. They’re gentle giants–as stated–and they’re incredibly patient. They love the attention the young ones give them, and the young ones love them because of their size and calmness. Thing is, these are massive dogs, and they can often hurt children if they’re not trained to play properly.

That’s why it’s incredibly important that if bringing a Bullmastiff into a home with small children, both the kids and the dog are taught how to properly interact with one another, respect each other’s boundaries, and understand the parameters of their relationship.

While Bullmastiffs are a generally healthy breed, their heavyset frames and tendency to gain weight can lead to health problems. It’s important that when purchasing a puppy you ensure the breeder can provide health clearances for both of the parents, and that these clearances were administered by certified establishments. Some possible Bullmastiff health issues are as follows:

Hip Dysplasia: a common health problem found in larger, heavier-set dogs, this occurs when there’s displacement between the thigh bone and the hip joint. This displacement causes the two to sit awkwardly, in turn producing a joint that doesn’t function properly. Symptoms include severe pain when walking, lameness in the leg(s), and at worst immobility. Hip dysplasia can be screened for, thus it’s important that the parents were both examined before being bred. There are a plethora of treatments for this condition, and often the dog leads a perfectly normal life.

Hypothyroidism: this condition occurs when the thyroid is deficient, and it can cause infertility, lethargy, a stifled intellect, and weight gain. The dog’s hair can fall out and the skin can darken. However, this condition is easily managed with medication, although the medication will need to be given throughout the remainder of the dog’s life.

Subaortic Stenosis: this condition is caused by a defect in the heart and forces it to work double-time to supply blood to the body. It’s an unfortunate hereditary illness that can cause weakness and even sudden death (if the heart is pushed too hard). It’s normally diagnosed by listening to the heart and causes ongoing problems.

Cystinuria: this is a genetic disorder caused by the incapacity to reabsorb an amino acid called cystine. Eventually, it causes kidney or bladder stones, which often don’t pass. When they don’t pass, they cause blockage, and this can be life-threatening (similar to the human anatomy). It can be diagnosed with a simple urine test, and everything from medication, alternate diets, and surgery can help the longevity of the dog’s life. Nothing would comfort him until we tried the Canna Pet Liquid and he was significantly less stressed within 15 minutes or so. It was such a relief to see this. Although he still was weary of the fireworks, he was no longer seeking shelter and upset. Thank you for this product and all the others we intend on trying in the future. Have been using canna biscuits for about a year now and recently started using the max biscuits, she loves the taste even though she’s picky and they really seem too help her with pain in her knee, she’s been fighting a minimal tear in her cruciate and we’ve been keeping her comfortable and from completely tearing it by using canna biscuits.