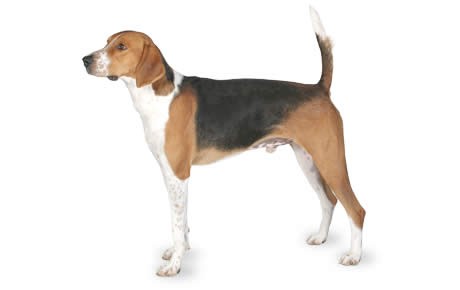 The American Foxhound is a dog breed that dates back to some of the earliest settlers in colonial America. Popular belief is that the line was first developed in 1650, when Robert Brooke brought over hounds from England. From these dogs, he bred the beginnings of the modern American Foxhound. George Washington, and other notable people, brought different hound varieties during the 1700’s. The American Kennel Club first recognized the American Foxhound dog breed in 1886.

American Foxhounds are a breed with several contrasting traits. They are generally extremely friendly with family, strangers, and other animals. They were bred to think and hunt independently, and operate as a part of a pack.

Many are still used as pack hunters to this day. If they are raised outside of a pack, they will bond strongly with their owner and family. Although they are independent, they do not like to be left alone and are known to become destructive if they become bored.

Although the American Foxhound puppy has a stubborn streak, if they are trained and socialized from a young age, many dog owners will not experience any problems. Like other hounds, they may still run off and ignore commands if they catch a scent. But for the most part, this breed will try their best to learn and follow commands.

American Foxhound’s were bred to chase down prey over long distances. As such, they have an enormous store of stamina. Failing to keep them well exercised may result in restlessness and destructive behavior. Expect to bring your American Foxhound on a very long walk or vigorous run each day. An extended play session will also benefit this breed. Be careful to keep your pup leashed, as he may run off as soon as he smells another animal.

Despite being one of the few, and arguably first, dog breeds created in the United States, the breed remains relatively rare. The American Foxhound is currently the 189th most popular AKC registered breed.

American Foxhounds have high energy so they will need to be fed a high-quality food source to sustain them. Look for foods that have a good balance of quality proteins and healthy fats. Avoid any foods with grain fillers, as these can lead to allergic reactions.

The amount of food you feed your Foxhound will vary depending on his activity level, weight, and age. For an average American Foxhound, expect to feed him between 2-3 cups of dry food per day, split into two meals.

American Foxhounds have a hard, medium-length coat that requires a simple grooming process. A thorough weekly brushing is enough to keep your dog’s coat healthy and debris-free.

Are American Foxhounds Good with Kids?

American Foxhounds are widely regarded as gentle, loving companions to children. They are very loyal, and bond strongly with their pack mates, making them excellent family dogs.

Hip dysplasia in dogs is a common condition that affects a number of dog breeds. Although rare in American Foxhounds, it is still sometimes seen. Hip dysplasia is caused by a loose fit between the femur and the pelvis. Over time, this loose fit causes the cartilage that protects these bones to wear unevenly, causing painful arthritis, bone spurs, and eventually canine lameness in the rear legs.

The American Foxhound is prone to developing canine ear infections, so be sure to include checking your pup’s ears during weekly grooming sessions to catch an infection early on. Ear infections are caused by a buildup of bacteria in the ear. In American Foxhounds, this is due to their floppy ears, which inhibit airflow to the ear, allowing moisture to build up and bacteria to form. Signs of an ear infection include a yellowish or brown discharge, a distinct and unpleasant smell, scratching at the ears, or shaking of the head repeatedly.

Thrombocytopathy is a disorder that affects blood platelets. These platelets are unable to function properly, resulting in an inability to clot. Thrombocytopathy is most commonly acquired, often from medication, although it can also be inherited. Common symptoms of this condition include blood in the urine or stool, nosebleeds, and excessive bleeding at wound sites.

The less common form often results in death while still in the womb. Because this is a congenital condition that is known to affect American Foxhound, be sure to speak with your breeder to ascertain whether it has ever been seen in your pup’s line. Thank you so much Canna Pet for helping us with our neurotic American Foxhound Penelope (Penny). Since starting CannaPet Sir Duke has less problem with his allergies, anxiety, and a better appetite.