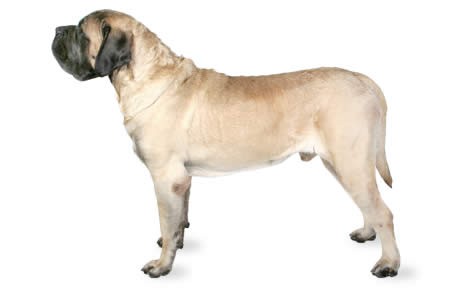 The Mastiff is the descendant of the Molosser, one of the oldest dogs in history. These were powerful, athletic canines borne to Europe from Asia, used as guard and hunting dogs. Their lineage can be seen in multiple breeds (Saint Bernards, other Mastiff types, Rottweilers, and more).

The ancient Mastiff-type dogs are seen everywhere in history, from the ancient Egyptians to the dawn of western civilization in Greece. As conquerors laid siege across the world, the Mastiff went with them and crossbred with multiple dogs to produce an assortment of different breeds. What we know is they ended up in Europe in the 15th century, and were bred there for another five centuries, used most commonly as guard dogs for large estates.

The Mastiff almost went extinct in the early 19th century, however, as dog fighting (and sports alike) were outlawed. This was one of their main uses. Then again in the WWI when poverty struck the world and there simply weren’t enough buyers or people willing to support the breed. But a few select breeders dedicated themselves to preserve their lineage, and by the middle of the 19th century, a handful of purebreds were imported to the US. They were then bred ongoing, and the presence of Mastiffs grew once more. The AKC recognized the breed in 1885. Since then, their popularity and presence has only continued to rise, and now they’re in the top 40 most popular dogs in the states.

The Mastiff is a dignified breed that’s docile, fearless, and patient. Although bred to be guard dogs, they aren’t overly aggressive, nor do they overstep their boundaries. They’re gentle and loving with those closest to them, but keep a firm presence in the wake of strangers. Quick to defend those they love, they often walk with an air of reserved caution. They’re aware, keen, and intelligent, constantly on the lookout for anyone that could threaten the safety of those they love.

Their loyalty has no bounds. There are plenty of stories in which a Mastiff will rise to protect children in a household when a parent is being too aggressive, or will choose a side in a domestic dispute. Amazing watchdogs, it is only the unlucky that break into a home which bears a Mastiff.

However, all their grandeur and poise aside, these dogs can tend to be incredibly sensitive. Both to their environments and to the moods of those they love most. If not properly raised, they can become timid, shy, and a bit aggressive. These prideful and competent canines should never be mistreated or handled with physical aggression, as that’s a certain way to destroy their trust and sense of security.

Many think–due to the sheer size of a Mastiff–that these dogs are high-energy, hard to manage, and should be kept outdoors. That’s a common misconception, as the Mastiff is primarily a house dog. They can adapt to most environments but are best fit to live in a large home with a fenced yard.

Puppy classes and early socialization are a must. As puppies, a Mastiff is prone to get into trouble. They’re curious, courageous, and like to cause mischief. Crate training is recommended, as not only will it help with obedience training, but it’ll keep your little pup from tearing up the new furniture in the front room.

Mastiffs need positive reinforcement mixed with a subtle, but firm hand of discipline. They’re not the most rebellious, but you’ll need to establish yourself as the alpha of the household and iron out that relationship early on. One of the biggest things to teach your Mastiff is to withhold their chewing tendencies. They love to chew on literally everything, and this becomes problematic if not properly addressed early in their puppy years.

All said and done, this breed is docile and easy to housebreak. Just be aware that behind

Exercise Requirements for a Mastiff

Mastiffs only require a moderate level of exercise. A 20 to 30-minute walk a day is highly recommended for this breed. Even though Mastiffs are large and bulky, they do not serve as a great running companion. If they over exert themselves or are in a hot climate, they can easily become overheated. Avoid this by taking your daily walks during the cooler parts of the day. This will ensure that they are gaining the necessary exercise requirements while lowering the risks of related health complications.

Are Mastiffs a Popular Breed?

The Mastiff currently ranks 28th on the AKC’s most popular list of 155 dog breeds. These fantastic home dogs are both the protectors of the household and the loyal guardian of the children. They’re docile, loving, and loyal. Another perk is that–for the dog owner that doesn’t want to have to exercise their dog for hours on end–the Mastiff is an extremely manageable breed across the board.

Feeding Requirements for a Mastiff

A Mastiff is a large canine, and thus it’s recommended that they eat 6-8 cups of high-quality dry food per day, broken into two even meals. A Mastiff tends to be glutinous about their food, in which it becomes a problem if they’re lethargic about exercise. Be sure to monitor their food intake and activity level to ensure they don’t become obese.

As with all dogs, age, metabolism, and weight all play a part in their diet. Consider each factor when creating their meal plan. Also, be sure to provide the highest-quality food possible, being that these dogs grow rapidly, and need the proper nutrients to ensure the healthiest aging process.

How to Groom a Mastiff

The Mastiff sports a double coat. The outer coat is usually shorter in length and thick, while the undercoat is a ball of denseness. It’s usually colored brindle, but also comes in fawn or apricot. Despite the coloring, their muzzles, ears, and nose are normally darker in contrast.

In terms of hygiene, you should brush your Mastiff’s teeth 2-3 times a week to avoid tartar and bacteria buildups. Trim their nails monthly, as you can’t count on them to wear them down naturally. Check their ears, eyes, nose, and mouth for anything suspicious (infection, redness, inflammation, and parasites).

Are Mastiffs Good with Children?

The Mastiff is incredible with children. No matter what the age, they’re friendly, loving, and gentle. They grow to become their support system and their steadfast protector. The only thing to be aware of is that–due to their size–when they play too roughly they can often injure the little ones. Just as well, children often think a big-boned Mastiff can take a beating when in reality their joints are extremely fragile (especially in their puppy years).

As with all dogs, it’s important to introduce the puppy and children early-on, then establish ground rules ongoing. They should both be taught how to properly interact with each other, play, and communicate.

Mastiffs live long for their size, but are often prone to joint problems because of their heavy-set frames. It’s especially important with this breed that the breeder can provide health clearances for the parents (a hip dysplasia screening should be included in this), and that these clearances are done by certified and validated establishments. While these may never afflict your dog, the conditions that can ensue are as follows:

Hip Dysplasia: this condition occurs when there’s displacement between the thigh bone and the hip joint. It causes severe pain when walking, an abnormal gait, lameness in the leg(s), and at worse immobility. As stated previously, hip dysplasia can be screened for. It’s important that both the parents passed the screening. However, there are treatments for this condition and it’s not life-threatening.

Progressive Retinal Atrophy (PRA): this degenerative disorder occurs when the photoreceptors in the back of the eye begin to fail. At first, the dog has difficulty seeing at night. This night-blindness then worsens and they have a tough time in light. Unfortunately, PRA leads to complete blindness. The disease can be diagnosed early, however, allotting enough time for the owner to prepare for a blind dog.

Epilepsy: similar to the human anatomy, Epilepsy causes seizures. In the dog world, this means they’ll run frantically from ‘ghosts,’ bark at nothing, walk with an abnormal gait, and at times collapse. Medication can help mitigate the condition, and it’s usually not life-threatening.

Cystinuria: this inherited condition directly affects the kidney. It occurs when the kidney has difficulty filtering the amino acid cystine out of the urine, in which kidney stones and kidney infections can develop. If your Mastiff frequently needs to use the restroom, or if there’s blood in their urine, these are usually signs that the kidneys have been affected. A simple urine test at the vet can diagnose the problem. Turbo is very hyper and has a lot of anxiety. Since the medication and a routine schedule, he is doing so much better. I would definitely recommend this product. I’ve been on Canna-Pet CBD oil for one year after a lump was found on my neck and I was struggling to run around. Now, I’m lump free and enjoy hours running on the beach! Prada is our eight year old rescue Mastiff/Boxer mix who suffers from hip dysplasia and Maxx our newly rescued one year old Staffi mix who suffers from anxiety and is very high strung. We have seen an astonishing improvement in both dogs within the first week. Thank you for producing such a high quality product that works! My kind neighbor saw me walking my Pit Bull mix a few years ago and noticed his awkward walking. Talkies to them a little bit and long story short they gave me a bottle of the MAX CBD capsules they had. A Blessing, you could see improvement in his walking and energy just after a few days. I bought the deal with the 3 flavors of Canna-Pet biscuit treats and the Capsules Advanced Large. And my fur babies love them all. So thank you so much Canna pet for making such a good quality CBC product for our fur babies and making life good for us and them. She was given a year to live diagnosed with cancer and severe knee arthritis. She was seemed so depressed. A friend told me to try canna-pet, I noticed a change in her with in the first week.