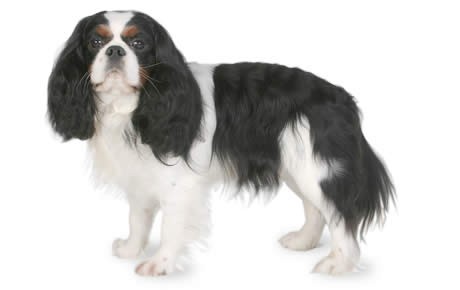 United States and abroad. The Cavalier King Charles Spaniel breed descends from the so-called “comforter spaniels” that served as lap dogs and companions for generations of English royalty. During the 1700’s, King Charles II was so enthralled with this breed that they forever became associated with him, becoming known as King Charles Spaniels.

Over the next century, the breed was altered to become what is now considered the English Toy Spaniel. The primary difference in characteristics was the shape of the face and head, with the English Toy Spaniel having a flatter face, a dome-shaped head, and a shorter nose. By the 1920’s, a wealthy American named Roswell Eldridge went to England and offered a large reward for any spaniel breed that had the longer muzzle that differentiated the original King Charles Spaniel breed. Once found, he named these dogs the Cavalier King Charles Spaniel in honor of the “cavalier king” Charles II, and began the work of preserving the original breed.

World War II interrupted these preservation efforts, with breeders having to resort to inbreeding to keep the breed alive. After the war, the Cavalier King Charles Spaniel breed survived and flourished. Within a short time, the Cavalier surpassed the English Toy Spaniel in popularity on both sides of the Atlantic. The first Cavaliers were sent to America in the early 1950’s. Since then, the Cavalier has experienced increasing popularity as a companion dog. Eventually, their numbers reached levels deemed appropriate for AKC registration, which was formally acknowledged in 1996.

Cavalier King Charles Spaniels are everything you could want in a companion dog. They have a gentle, loving, and an affectionate personality and love nothing more than to play and cuddle with their owner. Cavaliers are known to have a quiet temperament, making them ideal for apartment or urban dwelling. The Cavalier’s coat and demeanor result in a breed that has a decidedly regal bearing, keeping in line with their history and origin. Above all, Cavaliers are friendly towards all; human and animal alike. There is not a hint of aggression in this breed, which makes it a perfect companion dog for the whole family.

The Cavalier is an easy to train breed that learns quickly and loves to please. They are an excellent choice for first-time owners that are looking for a breed that won’t give them too much trouble. Cavaliers can successfully be trained to function as therapy dogs, which indicates their attitude towards obedience and their attentiveness to their owner’s needs and commands.

Exercise Requirements for a Cavalier

Cavaliers have a moderate energy level, so a short or medium length walk every day is recommended. This can be replaced with some playtime as well. Be sure your play area is fenced, because Cavaliers sometimes chase after the creatures they find in a yard.

The Cavalier is a very popular breed in both the United States and England. They are currently the 19th most popular AKC registered breed, which is doubly impressive given their relatively recent AKC recognition. Cavalier’s popularity has increased in recent years due to their appearance on television and as celebrity companions. However, their overall increase in popularity since their introduction in the United States in the 1950’s has much more to do with their docile, gentle, and happy personality.

To keep the Cavalier’s coat looking regal and beautiful, be sure to feed them a high-quality diet. Look for food with quality proteins, some fats, and vegetables. For optimal Cavalier King Charles Spaniel health, avoid food with the common fillers used in lower-quality dog food such as corn, wheat, and soy, as these have been known to cause allergies and are harder for dogs to digest. Cavaliers weigh anywhere from 13-18 lbs on average, so they don’t need a lot of food every day.

Depending on how much your Cavalier weighs, they will require between ¾ to 1 ¼ cups of dry food a day, split into two meals. This is assuming your food doesn’t contain fillers, which often require dogs to eat more to access the same amount of nutrients. As always, make sure that fresh water is always available for your Cavalier.

How to Groom a Cavalier

Cavaliers only have moderate grooming needs, and their grooming should be a pleasurable experience for both dog and owner overall. Cavalier coats are long and flowing, and come in 4 different varieties; a solid red (ruby), red and white (Blenheim), black and tan, and a tricolor variety. The Cavalier’s long coat should be brushed every other day, and will need extra attention if they play outdoors, as they can snag bits of debris.

Are Cavaliers Good with Kids?

Cavaliers are great with kids of all ages and make excellent family and companion dogs. They aren’t so small that they can end up underfoot, which results in injuries for toy breeds. They also aren’t large enough that they can inadvertently knock over a small child while turning or playing. They are affectionately playful and have a moderate energy level that makes them ideal for playing with kids.

Hip Dysplasia: This health problem results from a loose fit where the femur sits in the pelvic girdle. Evident in younger dogs only as a looseness in the hip assembly, over time this connection causes the cartilage that pads the femur and pelvis to wear unevenly. This uneven wear will result in a buildup of scar tissue and can result in bone spurs, both of which make movement painful. As a dog ages, the damage caused by hip dysplasia results in severe arthritis which can be exceedingly painful. Cavalier King Charles Spaniel hip dysplasia can be diagnosed early in life by a thorough physical examination by a veterinarian. Although hip dysplasia commonly affects larger breeds more often than smaller breeds, Cavaliers are at risk of developing this condition.

Patellar Luxation: Patellar luxation is a health issue where the kneecap (patella) becomes dislocated during exercise or play. Cavaliers are known to be predisposed towards developing this condition, so be mindful of the symptoms. Signs that your Cavalier has dislocated their kneecap are sudden limping or lameness during exercise, shaking of one limb, or a hesitancy to place full weight on one limb. If you suspect your Cavalier has suffered a dislocated kneecap be sure to bring them into a veterinarian immediate to be assessed, as it is a painful condition. Patellar luxation can be treated surgically in most cases.

Cataracts: Cataracts are a hereditary eye problem that can affect Cavalier King Charles Spaniels. This disease is a condition where the lens of the eye, normally clear, becomes cloudy and opaque over time. In Cavalier’s cataracts usually appear during adolescence. Because cataracts are an inherited disease, inquire with your breeder as to whether they have had the parents tested for cataracts, and whether cataracts have ever appeared in the line. Many Cavalier breeders are actively working towards eliminating this disease in their lines, so it is relatively uncommon in the Cavalier.

Syringomyelia: Syringomyelia is a health problem affecting the spinal cord of many toy breeds, including the Cavalier. This condition occurs when spinal fluid enters the spinal cord, forming a cyst or cavity known as a syrinx. Over time the syrinx can expand, causing destruction of the spinal cord. This condition is extremely painful and can be debilitating as it progresses. Pain localized around the neck area is the primary indicator that your Cavalier may have syringomyelia. Your Cavalier may repeatedly attempt to scratch at their neck area and will show definite discomfort if you touch this region. As symptoms progress, your Cavalier may develop loss of coordination, muscle weakness, loss of hearing, and numbness in certain parts of their body. In mild cases of syringomyelia, veterinarians may prescribe an anti-inflammatory to help the body mitigate the symptoms of this health issue. In most cases, however, surgical intervention will be necessary to relieve the pressure the syrinx is placing on the spinal cord.

Primary secretory otitis media (PSOM): PSOM, also known as “glue ear,” is a condition where a thick mucus plug forms in the middle of the ear, placing pressure on the tympanic membrane. PSOM can cause symptoms similar to syringomyelia. Signs of PSOM are varied, but usually include either moderate to severe pain in the head and neck region, and shaking of the head or scratching at the ear. Some Cavaliers that are suffering from PSOM also experience partial facial paralysis, seizures, difficulty or an inability to blink, and drooping ears or lips. PSOM is a condition that has been almost exclusively diagnosed in Cavaliers. PSOM is also a difficult condition to diagnose, due to the shared symptoms with syringomyelia and the requirement that a dog is placed under general anesthesia to conduct an accurate diagnosis. PSOM is treated surgically to remove the mucus plug from the ear, with surgery generally being followed by administration of medication to keep the mucus buildup from returning. I have been using them on my Cavalier who has allergies and itchy skin, gets creepy crawly back, since taking it, it has stopped, very pleased. Now thanks to the CBD Charlie can sleep comfortably through the night. It has also made him able to run, something which we never saw him do since we got him in January 2018. Today was his second day on canna-pet CBD, and he was a totally different dog. He was still active and playful, but his anxiety was almost completely non-existent. My 10 year old cavalier king Charles spaniel has SM, I read about the oil on a Cavalier SM Facebook group and sent for some – its amazing Summer has been on it for a week and the change in her is amazing! He’s gone from one seizure a month to one every five months!!! And they are much milder and shorter.