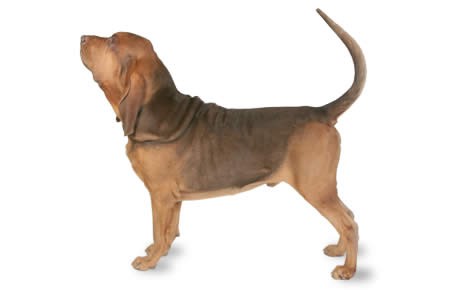 Known for their impressive sense of smell, the Bloodhound dog or St Hubert Hound is a popular dog breed that has been around for centuries. It’s this exact characteristic that they’re sometimes called a “scent hound”. While their origins may be unknown, they have been traced throughout Mediterranean countries as early as 3 A.D. According to researchers, the Bloodhound breed was brought to Europe from Constantinople and was eventually brought to England, France, Belgium, and other nearby countries.

Once called St. Hubert hounds, these dogs were bred by monks from St. Hubert’s abbey. Francois Hubert, the patron saint for hunting, was a lover of Bloodhounds and enjoyed breeding them to aid in his hunting quests. Hubert bred the Bloodhound in order to use their strong sense of smell to follow cold and old trails. Even after his death, this breed was widely popular for monarchs and noblemen alike.

Later in the 18th century, Bloodhounds were used in England to track down felons, capitalizing on their hunting skills to track a scent trail in criminal pursuits. Even Benjamin Franklin was interested in acquiring a few Bloodhounds for special tracking missions.

Today, the Bloodhound is used by law enforcements across America, mostly in their tracking or search and rescue divisions. All in all, this breed is gentle, kind, and even-tempered, which makes it a great pet for any household.

Bloodhound breed standards and characteristics include strong, affectionate, and stubborn. For the most part, the Bloodhound is a great family companion. They exhibit many favorable qualities for pet owners, showcasing a docile and lovable personality. Even though they require a lot of physical activity to keep them happy, they still know how to be lazy when lounging around with the family.

Make sure to have high and secure fencing in your backyard. A Bloodhound will follow a scent at any cost and can make a quick escape if left unattended. Most of the time, this breed can get along with other dogs just fine.

Keep in mind that some Bloodhounds will fight with other dogs of the same sex. This is quite common in many breeds and is something to look out for when introducing your pet to other dogs. They can also get along with cats as long as they have been raised with them at a young age.

Due to their stubbornness and independent qualities, a Bloodhound can be a difficult breed to train. If you want a Bloodhound as your first pet, know that training them can be an overwhelming challenge. Many professionals say that previous experience is required when training a Bloodhound. If you still want this breed but lack the knowledge and discipline, consider enrolling your dog in a puppy training course for additional support.

It is also recommended to train your bloodhound indoors. This breed is known to get distracted by small animals and unique scents and will chase anything that catches their attention. By doing the training lessons indoors, you will be able to limit the amount of distractions for your bloodhound.

Since this is a sensitive breed, be sure to socialize them as young as possible. New people, animals, places, sounds, and experiences are all critical factors when training your dog. Familiarize them with as many things as possible; starting early on to ensure a well-behaved pet in the future.

Exercise Requirements for a Bloodhound

The Bloodhound is a large dog known for being a very active breed, especially during their younger years. Long walks and runs are highly recommended to satisfy their daily exercise requirements. Allow them to explore any enclosed spaces that they can sniff and wonder as they please.

A bloodhound needs frequent activity to prevent them from becoming bored. A restless bloodhound will cause havoc in a household- chewing sofas, remote controls, or anything else they can get their paws on. Boredom can also affect their mental health as well.

Frequent walks will provide them with overall physical and mental support to be a happy and healthy dog. Make sure to also keep them on a tight leash or fenced-in area. These scent hounds will take off if given the chance, and should be carefully watched at all times.

The Bloodhound life expectancy is 10-12 years.

Popularity of a Bloodhound

Throughout history, the Bloodhound was used for their hunting and tracking skills all throughout Europe. During World War II, this breed saw a huge decline across England due to limited supplies and food.

Later in the 19th century, they were bred in the U.S., which increased their popularity and grabbed the attention of many breeders throughout America. In 1885, the Bloodhound was finally recognized by the American Kennel Club.

Today, this breed is ranked 55th most popular breed in the United States. Not only are Bloodhounds praised for their unique tracking skills, but they are also loved for being a great household pet for any size family.

Feeding Recommendations for the Bloodhound

The Bloodhound needs a substantial amount of dog food to satisfy their nutritional needs. Their strong build and high energy levels require between 4-8 cups of food every day, split into two separate meals. Keep in mind that the amount of food varies on each individual dog. Factors to consider include their metabolism, age, size, and overall activity level.

Bloodhounds are known to be very messy eaters, so choose a dish that is narrow in diameter to prevent their ears from getting in their food. In order to avoid obesity, make sure to only feed them twice a day.

How to Groom a Bloodhound

The Bloodhound has a thin fur coat that comes in black, tan, red, or some type of combination. Unlike many other breeds, the bloodhound has an excessive amount of skin that folds and overlaps. These folds need to be carefully checked and cleaned during standard grooming practices. Yeast and bacteria are known to become rampant in bloodhounds with poor hygiene.

Bathe your Bloodhound at least once a month to reduce odor. Since their folds require more maintenance and cleaning, bathing is a critical component for their grooming. Also be sure to thoroughly dry them completely to reduce the moisture in their folds.

Since this breed has sensitive skin, make sure to use a high-quality shampoo that is approved by your veterinarian. The actual coat of the Bloodhound is fairly easy to maintain. Use a slicker or rubber brush once a week to rid their coat of any loose hairs. It is also very important to check their ears regularly. Their long flapped-over ears are prone to infections and bacteria growth, especially in humid weather.

Lastly, be sure to trim their nails regularly. Overgrown nails can cause discomfort or further health complications for your pet, so professionals recommend trimming once or twice a month.

Are Bloodhounds Good With Kids?

Bloodhounds are very good with children. The Bloodhound personality is even and calming making them a fine companion for just about anyone. However, since they are a large and strong breed, infants and toddlers can easily be pushed around or injured when trying to interact with a Bloodhound.

Most of the time, a Bloodhound does not realize their true size and may be a little too rough with small children. That’s why a household with older children is always preferred for a Bloodhound. Just like with any breed, supervision is always recommended when there is a dog and a child present.

Familiarize your pet with children as young as possible so they will be comfortable with them later on. This is an important step in the training process that will help to socialize your Bloodhound with different people. You would want to do the same for any sized dog, even a small Yorkie poo!

The Bloodhound is a relatively healthy breed, however, they are still prone to several health complications. Below is a list of the most common Bloodhound health concerns and genetic predispositions.

Hip Dysplasia: The hip joint and the thigh bone are commonly affected by Dysplasia. This deformation of the hip socket causes pain, discomfort, and lameness. In severe cases, hip dysplasia will deteriorate the hip joint, causing loss of movement. This is common in Labradoodles as well.

Eye conditions: Several eye conditions are prevalent within this breed. Entropion or “cherry eye” occurs when the eyelid folds inward, causing the eyelashes to irritate the cornea. Another common medical condition is ectropion. Ectropion causes the lower eyelid to roll outward, which exposes the inner eyelid and causes redness and irritation. The last eye condition that commonly affects Bloodhounds is keratoconjunctivitis sicca (dry eye). Dry eyes in dogs result from a lack of tear aqueous produced, which causes severe irritation of the cornea. Routine care should be done on the eyes to avoid these issues.

Hypothyroidism: Hypothyroidism occurs in dogs who have a low level of thyroid hormones produced in their body. This can cause fluctuations in weight, skin complications, and lethargy. Luckily for pet owners, hypothyroidism can easily be cured with a simple hormone pill. Signs and symptoms of hypothyroidism to watch for are hair loss, unexplained weight gain, lethargy, and dark pigment on the skin.

Epilepsy: This neurological disorder is the number one cause of seizures in dogs today. While the cause of epilepsy is unclear, some cases have been tied to brain tumors, trauma, and toxins.

Bloat: Bloat is a common health concern for all dog breeds, but especially for Bloodhounds. This health complication occurs when the stomach fills with air, food, or gas and becomes trapped. This blocks the passageways in the stomach and can cause gastric dilation volvulus (twisted stomach). A dog diagnosed with Bloat needs medical attention as soon as possible. If gone untreated, this health complication can lead to death.

Dog health is a top priority for dog owners. So regular visits to your veterinarian is a must for optimum pet health.