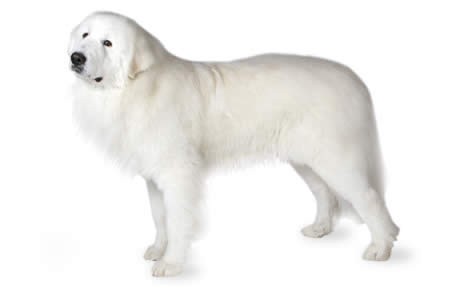 The Great Pyrenees—also known as the Pyrenees Mountain Dog—originated in the Pyrenees Mountains between France and Spain. Experts speculate the dog came from Asia Minor, eventually migrated east, and thereafter became a guard dog bred by Shepherds (used specifically to protect their droves).

The breed was abundant in the 13th-16th century, often owned by poorer farmers and commoners. However, towards the end of the 17th century, King Louis XIV instated The Great Pyrenees as the Royal Dog of France. This, of course, spurred a newfound popularity (particularly among the royal and noble communities).

A couple centuries later, the Great Pyrenees breed was imported to Newfoundland, Canada, and is attributed as one of the ancestors of the crossbreed which led to the Landseer Newfoundlands—which look like the Dalmatian version of the Great Pyrenees. By the 19th century, the purebred Great Pyrenees found its way into the United States and had a slow rise to popularity—debilitated by the two world wars—but eventually solidified its former presence.

The Great Pyrenees, despite WWI, was recognized by the AKC in 1933.

The Great Pyrenees personality and temperament is a dynamic blend of the intelligent, cautious guard dog, and the docile, loving home body. This very blend is what makes them a favorite. Their characteristics are cute, cuddly, and affectionate, yet you can rely on them to be attentive around the youngsters or the home.

These are working class dogs, and thus their intelligence begets both stubbornness and independence. They’re lone wolves by design, and will often act as such, but their sweet spot is for the family. These dogs need early socialization, but they’re not prone to be people hating, nervous, or wary of other canines. In fact, their courageous and independent demeanors also instill a sense of ‘I-can-do-anything’ type of confidence. They’re ready for the world and are aware of it.

If the goal is to have a large dog that is both friendly and protective, the Great Pyrenees fits the agenda perfectly. Do note: a lot of their workaholic traits have been substituted for home body traits, and often they won’t have the same robust enthusiasm for the outdoors like other herding or working class dogs. Don’t expect a serious outdoor companion out of your Great Pyrenees.

These dogs require quite a bit of training but are overtly docile. First and foremost, you’ll need a house with a yard and a large fence. The Great Pyrenees is used to roaming the planes in the mountains, protecting flocks of sheep, and claiming territory. While they won’t be sprinting around the place, these dogs can climb and cut through terrain better than most. They’ll scale a sizeable fence with ease, and navigate snow dexterously. Always keep an eye on a Great Pyrenees when they’re not fenced in.

Early socialization and puppy classes are a must. The Great Pyrenees needs to experience other dogs, people, and environments early on—not only for stimulation—but to understand the rules of engagement. When training your Great Pyrenees, use positive reinforcement. If you scold them or hold too firm a hand, you run the risk of creating an anxious, timid canine. Not to mention that they have an uncanny ability to remember everything. To that note, establish rules early. Since their memories are so keen, right off the bat you need to declare house rules, or they will remember their ‘rules’ differently.

Keep these dogs stimulated. While they won’t need to run around for hours on end, they’ll need toys, games, and command training to keep their sharp wits active. A bored Great Pyrenees means a destroyed home. This is a breed that needs to be consistently engaged.

While these are working-class dogs, their need for exercise is relatively low. About 30 minutes of activity a day should do it, with perhaps double that in their puppy years (depending on the dog). While they may not want to run around vigorously or go on long hikes, they love to explore. Let your Great Pyrenees out in a large, fenced-in area, and watch them try and sniff out the entire territory.

Despite their relatively low need for exercise—when taking into consideration the type of dog—it’s important that the owner never allows them to stagnate. This will cause both boredom and obesity.

Being that they’re intelligent, use the time of exercise—especially early on—to train, stimulate, and teach them games. They love to play fetch and try to understand what they’re being taught. Killing two birds with one stone—in terms of training and exercise—works exceptionally well with this breed.

A Great Pyrenees life expectancy is typically between 10-12 years.

The Great Pyrenees ranks 67th on the AKC’s most popular list of 155 registered dog breeds. While they’re loved for their calm demeanors and heavy frames, intelligence and startling intuition, the fact remains that these are big dogs with little spunk. Often owners who prefer larger breeds want an outdoorsy companion with lots of energy. Some owners who prefer smaller breeds do so because they want a homebody that’s not going to be too taxing on the management front. The Great Pyrenees inverts those too. Even though their popularity has only grown since the 1950s, they still remain to sit in the middle of the list.

Feeding Requirements for a Great Pyrenees

A Great Pyrenees requires 4-6 cups of high-quality dry food per day, administered as two equal meals. Thing is, the Great Pyrenees can be glutinous about their food and become obese because of it. It’s important, more than any other factor, that the owner weighs the dog’s amount of exercise with their food intake when calculating a balanced meal.

In addition, age, metabolism, and weight need to be considered as well. It’s important to consider all factors and monitor a Great Pyrenees’s diet carefully to keep them both healthy and in shape.

Grooming Suggestions for a Great Pyrenees

One of the most identifiable traits of a Great Pyrenees is their coat. They look like giant fluffy clouds. Their double coats usually have a thick, coarse top, and a wooly undercoat. Normally, they have manes or ruffs and a fair amount of feathering on the hind legs. The hair is usually thick and wavy, or silky and straight. Rarely do you see a Great Pyrenees with curls.

If you’re purchasing a Great Pyrenees, prepare for shedding. They’ll need to be brushed weekly to mitigate the problem, and even then—depending on the season—it might have to become a daily routine. However, managing their coats is a breeze, as the straight hair responds well to brushings. Do note: you should never cut their coats in hotter climates, as owners often make the mistake thinking they’ll be cooler, when in fact it’s their full coats that help regulate body temperature.

Hygiene upkeep is a must with this breed. They’ll need their teeth brushed 2-3 times a week to avoid tartar and plaque buildups. Their nails will need trimming because you can’t count on them to wear down naturally. The eyes, nose, ears, mouth, and coat need to be checked for inflammation, redness, infection, and parasites. They’ll need to bathe once every couple months, with a high-quality shampoo that won’t ruin their natural oil in their coat.

Introduce these routines of upkeep early on in order to accustom your Great Pyrenees to the process. Incorporate the sessions into their obedience training.

Perhaps one of the biggest selling points of a Great Pyrenees is how well this massive dog behaves with children. Not only is he incredibly patient with them, but he also tends to be extremely gentle with the younger ones. Working as their protector and supporter, this dog makes for a perfect companion. The only downside is that early on, your kids won’t be able to walk this breed, as they’ll often overpower the children.

As with all dogs, it’s important that upon arrival, a clear foundation is developed between the children and the canine. They should be taught to respect each other’s boundaries, the proper form of interaction, and how to play properly.

The Great Pyrenees is generally a healthy dog that lives to be a decade or older. However, they’re not immune to illness or disease. That’s why it’s incredibly important to be sure that the breeder can provide health clearances for both of the parents. These health clearances should be issued by validated establishments. In the off chance your Great Pyrenees experiences health complications, possible issues to occur are as followed:

Hip Dysplasia: a common condition in larger canines, this occurs when there’s displacement between the thigh bone and the hip joint. It causes immense pain, difficulty walking, lameness in the leg(s), and at worst immobility. Hip dysplasia can be screened for however, and it’s important these screenings were done to the parents beforehand. There are treatments available for this condition.

Gastric Torsion: also known as bloat, is a life-threatening condition often afflicts larger canines. In short, it occurs when the dog cannot pass gas, the stomach continues to fill with air, and eventually, blood flow to the heart is restricted. Gastric Torsion can happen quickly, and thus it’s important to research and know every symptom. When these symptoms occur, the canine needs to be rushed to the hospital immediately.

Bone Pain: a Great Pyrenees needs to be treated delicately until they’re an adult. Reason being, is their bones tend to grow incredibly fast, which exposes them to growing pains. We’ve all experienced them, and there’s no evidence that points to bone pains in dogs being more merciful. While this isn’t a threatening condition, it’s important to be aware of.

Patellar Luxation: this occurs when the knee joint (most often of the hind legs) continuously dislocates. In other words, it’s constantly sliding in and out of place. While this condition can cripple a canine, they often adjust their gait to compensate for it and live healthy lives. Zeus is maintaining mobility after being diagnosed with bone cancer in right rear knee back in august of 2019. I can say the quality of life has been extended very well by the Canna-Pet supplies. Now she’s back to catching squirrels, digging for chipmunks and even tussling with raccoons! Again, thank you to you and your crew for helping us make our boy’s life a bit more comfortable. This is a great product and I’m very happy with it. Thank you Canna-pet!