No matter how old your dog is, when they have a seizure, it’s a terrifying experience. As your dog ages, health issues tend to crop up more frequently – and you spend more time worrying about them. Despite appearing to be life-threatening, most seizures do not affect dogs long-term.

But it all depends on what is behind the seizure. Dog Seizures happen for a variety of reasons, regardless of a dog’s age. The age of your dog, though, can help you determine why he is having seizures. Common Types of Seizures in Dogs

The sight of your dog writhing around on the ground and foaming at the mouth is a scary sight. But it’s important to know what a seizure is, and why your dog reacts the way it does. A seizure is caused by abnormal electric activity in the brain. Neurons “misfire” and send signals to the body that result in seizures.

During a seizure, your dog may look like he is suffering, but he is unaware of what is happening to his body. That’s why he may seem confused after the seizure has concluded. The reasons why this abnormal brain activity happens though, are less clear.

Grand Mal: Grand Mal seizures are the most serious types of seizures, generally lasting from a few seconds to a few minutes. They affect the entire body, as neurons misfire throughout the brain. Focal: Focal seizures are the result of abnormal electric activity in a concentrated area of the brain, and generally affect only one side of the body. Focal seizures last only a few seconds. 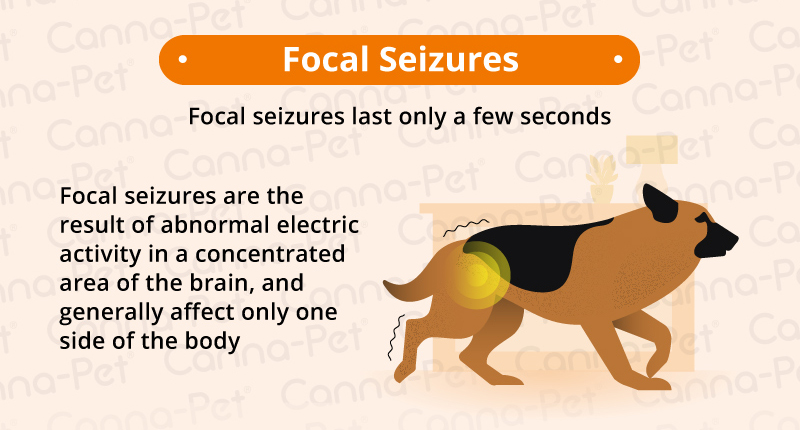 Psychomotor: Psychomotor seizures are rare but unique. Your dog will exhibit identical behavior each time he has a seizure, whether it’s running in circles or rubbing his paws together. Causes of Seizures in Older Dogs

In fact, most seizures start between the ages of 6 months to 6 years of age. If your dog did not start having seizures until much later in life, it could be due to more serious health problems, including:

Brain tumor: Brain tumors often develop later in a dog’s life. Both cancerous tumors (otherwise known as Neoplasia) and non-cancerous tumors can cause your dog to have a seizure, as they put pressure on the brain. If your older dog is having a seizure for the first time, it may be an indicator that a tumor is present. Liver disease: Liver disease or failure can result in seizures, but seizures are not normally the first sign of liver problems. Before your dog gets to the seizure stage, he will exhibit numerous signs of liver issues, including abdominal swelling, vomiting and diarrhea, jaundiced skin, lethargy, and even personality changes.

Kidney Disease: Like heart disease in humans, kidney disease in dogs is the main cause of “dying of old age” in dogs. In the advanced stages of kidney disease, canine seizures can present themselves. Diabetes: Diabetes itself does not cause seizures in dogs, but if your dog is being treated with insulin for the disease, and overdose can cause a seizure.

Cushing’s Disease: Caused by a lesion in the pituitary gland at the base of the brain, advanced Cushing’s Disease can create larger tumors that put pressure on the brain and lead to seizures. If your dog begins having seizures late in life, the cause is generally not genetic predisposition to Idiopathic Epilepsy. However, if you adopted your dog when he was older, the condition may have been present throughout his life and is reappearing for the first time in your presence.

If you adopted your dog, try to learn about his medical history from the rescue or family. If you have had your dog since he was a puppy and seizures are just beginning to arise in his older years, an underlying medical issue is the most likely cause. Whenever your dog exhibits odd behavior or seizures, it is wise to seek veterinary advice. Ask your vet how Canna-Pet’s full spectrum hemp oil for dogs can help your pet.